What Happens When You Attend A Military Funeral Or Memorial?

Posted on November 7, 2022 by lyonsfuneral under Cremation services
Comments Off on What Happens When You Attend A Military Funeral Or Memorial? 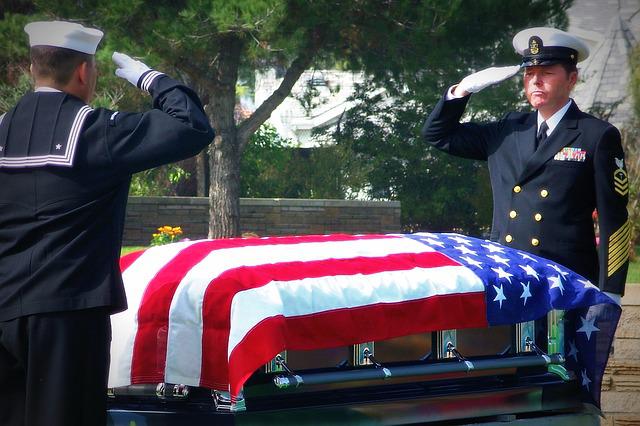 A military funeral is different from others because of the service member. You’ll find that a funeral home and cremation provider in Beverly, MA has also dealt with these types of funerals, which means that your service member will be honored appropriately. Most families, however, are unsure about the process, which is where we come in.

Taps Will Be Played

One thing that sets a military funeral apart from others of the exact nature is that Taps are played, and you receive an army flag. If the deceased service member has a wife at the funeral, the banner will go to her, but if there is no wife present, it will be given to his mother or father.

The version of Taps that we know today was recognized in the late eighteen hundreds. It began playing at funerals so the military member would be remembered and honored correctly. In 2000, there was a new act for playing Taps at a funeral. A stereo may be used, but a live bugler is preferred.

To have a fly, you need specific permission from the military. Approval has to go through a particular process, and acceptance depends on various things, including eligibility, an aircraft’s availability, and the service’s location. Inclement weather can also play a part. If you do get permission, however, this can be a beautiful way to honor your loved one after they gave so much to our country.

Being Buried At Sea

Because the person is a military soldier, the rules for being buried at sea are slightly different. When you get buried at sea, and you’re not a military person, you have to get permission, and there are a wide variety of options that you can take. However, when you’re an army soldier, you need the Navy or Coast Guard’s permission. In addition to this, Navy burials do not usually permit the family to be present as the service is performed while a ship is deployed.

The ship’s commanding officer will instead perform the ceremony, notify the family of the date and give them the coordinates once the traditional service has been completed. While this is the conventional method of honoring the fallen, you’ll find that not everyone likes it. Families tend to have a mixed view on this because they want to be present for their loved one’s funeral, but at the same time, they want their son or daughter to be honored the way they should be. The same is true of spouses. It is a hard choice, but the wife would often prefer their soldier to be honored as they deserve instead of physically present. Pre-planning your funeral services can save your loved ones from having to make decisions while they’re grieving.

The Funeral Home Can Help You Decide

While a military funeral is done differently, you’ll still speak to a funeral home and cremation provider in Beverly, MA director about the right things and how they should be done. When you want to ensure that your soldier has the funeral they deserve, ask questions and get in touch with the base they served on. This will ensure that everything goes smoothly.