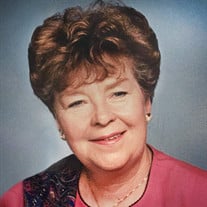 BEVERLY- Winifred M. “Winnie” Kane, 79, passed away on February 18, 2021. She was the wife of Daniel "Danny, Dannyboy" Kane with whom she shared over 54 years of marriage. Born in Dublin, Ireland on July 17, 1941, she was the daughter of the late Sean and Maureen (Bogue) Devlin. She was the eldest child and lived her entire life fine-tuning that role. She was raised in Ireland and immigrated to the United States in the early 1960’s. Winnie was employed by Aer Lingus in Dublin and was recruited to assist with the opening of their first station at Logan International Airport in Boston. She resided on the North Shore for several decades, first in Peabody and then Boxford. Winnie also lived in Homosassa, FL for 20 years before returning to Massachusetts. She enjoyed travelling and completing The New York Times crossword puzzles (in ink!) faster than her siblings. She found great joy in curating her garden at all of her homes. She was also renowned as a “fashionista,” having inherited her sense of style from her dress-maker mother, Maureen. Winnie was quite the pioneer when it came to balancing an amazing career and the demands of motherhood during an era when juggling these two roles was uncommon. Although she lived most of her years in the United States, she frequently popped “home” to Ireland at a moment’s notice. Often, she was laden with the latest technology to bring to her family and friends in Ireland. She’d return with the most amazing chocolates and jams which were devoured by her children without permission. Winnie traveled the globe visiting Australia, Russia, most of Europe, Hong Kong, South Africa and the Caribbean, as well as extensive exploration of North America. She passed along her love of adventure to both of her daughters. Winnie was fiercely competitive and her globe-trotting ways helped make her nigh unbeatable in trivia battles. She did so love the thrill of victory! She was a force of nature with an indomitable spirit. It was this strength which enabled her to survive a massive stroke at the tender age of 44, one that would have felled lesser humans. Upon hearing from doctors that she might need the aid of medical apparatus to walk again, she accepted the challenge, PROUDLY strutting out of the rehabilitation center rocking four inch stilettos. She refused to compromise her high standards, instead drawing others to her level. Winnie did not suffer fools and was unapologetically vocal in her opinions. But to the depths of her core, she was selfless, and generous to those she loved. Winnie befriended people for a lifetime. You would receive cards, letters, and thoughtful gifts for every occasion or for no reason other than that she wanted you to know that you were loved and in her thoughts. Upon visiting her home, she would “Shine Up the Welcome.” Your favorite food and drinks were prepared, and you were treated like royalty--and yes, many times there was a mint on the pillow of your freshly-made bed! Shortly after her stroke, Winnie and Danny embarked upon a pilgrimage to Medjugorje to witness in person the purported apparitions of the Virgin Mary. The accommodations were rustic and the landscape harsh, posing severe physical challenges for anyone, and even more so for a recent stroke survivor. However, they returned from their quest with a renewed commitment to their Catholic faith. In addition to her epic husband Danny, she is survived by her daughters, Bronwyn Kane and Deirdre Thomas and her son-in-law, Steven. Winnie shined as a Nana to her grandchildren, Eilís, Sinéad and Déaglán Thomas, who were blessed to have her love, support and care. Winnie is also survived by her siblings, Angela LaGrue, Dolores Smith, Imelda Devlin, Frank Devlin, Aidan Devlin, and generations of nieces and nephews. She was predeceased by her brother, John Devlin. Her Funeral Mass will be held privately due to the pandemic. The family looks forward to a grand celebration of her life in the future. Flowers cannot be received at the church at this time. Expressions of sympathy may be made in Winnie’s honor to The Hearing Health Foundation. www.hearinghealthfoundation.org In the Irish language, we bid a final farewell to Winnie: Slan Abhaile, Oiche Mhaith agus Chodlagh samh. Ta gra againn duit. Slan agus beannacht dei. “Safe home. Good night and sleep softly. We love you. Goodbye, and God bless you.” UP THE DUBS!!!!!!!!!

The family of Winifred M. Kane created this Life Tributes page to make it easy to share your memories.