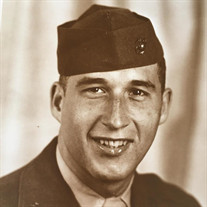 William Auguste Theriault, age 90, died Saturday May 16, 2020, at the Salem Hospital following a brief illness. A lifelong resident of Salem, Bill was born on July 11, 1929, the son of the late Auguste and Emma (Gagne) Theriault. After attending Salem High School, he enlisted in the United States Marine Corps and served during the Korean War. Stationed at Camp Lejeune, North Carolina, Bill trained as an aerial photographer and later became a photography instructor. His passion for photography continued after his service. Following his service in the Marine Corps he was employed by Cushman Bakery and the Dupont Chemical Company. In 1973 he joined Raytheon as a guard, and then entered their electrical apprenticeship program and earned his electrician’s license and finally retired from Raytheon in 1994. A longtime member of the Salem YMCA, Bill was a dedicated swimmer who spent much time in the pool or at the gym. He was a dedicated family man who enjoyed gardening, camping with the kids, and all outdoor activities. He is survived by his wife Jane (Fraser) Theriault and his five children, Patricia Murphy and her husband Greg, Kevin Theriault and his wife Lisa, Karen Bockoven and her husband Ralph, Kathy Bushway and her husband Jerry and Janet Choquette and her husband Bill. He is also survived by two sisters, Lucille DeRubio and Leonne Provencher; and by ten grandchildren and one great -grandchild. He is predeceased by his sibling Robert Theriault, Rita Berube, and Anita Shalit. A small private family service will be conducted on Saturday, May 23, 2020. A larger celebration of his life will be scheduled at a later date. In lieu of flowers, memorial contributions can be made to the American Cancer Society, 3 Speen St., Framingham, MA 01701 or the Salem YMCA, 1 Sewall St., Salem MA 01970. Arrangements are by C.R. Lyons & Sons Funeral Directors, 28 Elm St., Danvers Square. To leave a message of sympathy for Bill’s family, please visit www.LyonsFuneral.com.

William Auguste Theriault, age 90, died Saturday May 16, 2020, at the Salem Hospital following a brief illness. A lifelong resident of Salem, Bill was born on July 11, 1929, the son of the late Auguste and Emma (Gagne) Theriault. After attending... View Obituary & Service Information

The family of William A. Theriault created this Life Tributes page to make it easy to share your memories.