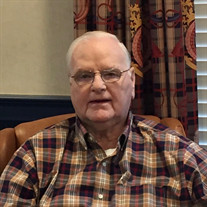 DANVERS- On Thursday, May 21, 2020, William Crowley O’Connor passed away at Beverly Hospital at the age of 89. Born in Danvers, on January 6, 1931, Bill was the son of Michael O’Connor and Nora (Crowley) O’Connor. He is pre-deceased by his parents and six siblings including John O’Connor, Eileen Cullen, Mary O’Connor, David O’Connor, Philip O’Connor, and Nancy Riley, as well as several nephews, nieces, and cousins. For 87 years, Bill resided in Danvers with his sister, Mary, until her death at age 93. Most recently, he was a resident at the Herrick House in Beverly. Born during the Great Depression, Bill helped to contribute to the family’s welfare by delivering newspapers and working at Tutko’s Farm as a young boy. He later attended St. John’s Preparatory School in Danvers, an experience that impacted him in a profound and positive way. Throughout his life, Bill spoke fondly of his student days at the Prep and of his great respect for the Xaverian Brothers who instructed him. Following high school, Bill attended Merrimack College and ultimately accepted employment at Craig Industries, where he worked until his retirement in 1993. A lifelong bachelor, Bill was a private person who was affectionately known as “the quiet man”, although his quick wit was legendary. He took great pride in caring for his two properties, one on the Putnam Reservoir in Danvers and the other at Wingaersheek Beach in Gloucester. He also loved dogs and was never without a trusted canine companion at his side. A voracious reader, he was well-versed in both history and politics and always ready to debate the latter. Bill also cherished his Catholic faith and was a long-standing congregant at Saint Mary of the Annunciation Church. With the exception of a small circle of acquaintances, Bill’s family members were his dearest friends. He was a devoted son, brother, and nephew, caring for his elderly parents and sister, while also regularly visiting ill and aging relatives. Always willing to lend a hand, he would rake his sister’s leaves, deliver someone to the airport, or chauffer young nieces to church on their wedding days. Siblings, cousins, nieces, and nephews thoroughly enjoyed his company and looked forward to spending summer days with him at the beach house or gathering at his Danvers home for skating, sledding, and holiday celebrations. Bill’s affection for his family was returned in kind. In his later years, when his health began to fail, devoted nieces and nephews honored him by visiting regularly, running errands, taking him on excursions to favorite restaurants, and assisting with his medical care. Bill knew that he was well-loved and that the love was well-deserved. And, so, Bill, we pray that “until we meet again, God will hold you in the palm of His hand”. Bill is survived by many extended family members including cousins, nieces, and nephews as well as dear family friends. His Memorial Mass will be celebrated at 11AM on September 4, 2021 in Saint Mary of the Annunciation Church, 24 Conant St., Danvers. Donations may be made in Bill’s memory to the Office of Institutional Advancement, St. John’s Preparatory School, 72 Spring Street, Danvers, MA 01923.

The family of William C. O'Connor created this Life Tributes page to make it easy to share your memories.