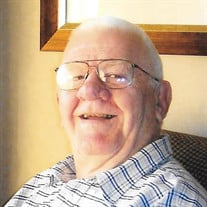 DANVERS- William H. McCarthy, 86, passed away on November 5, 2016 in Beverly Hospital. Born in East Boston on November 27, 1929, he was the son of the late John and Elizabeth (Connolly) McCarthy. He was raised and educated in East Boston and graduated from East Boston High School in 1946. William served our country with the United States Army during the Korean War and was honorably discharged. He had been a resident of Danvers since 1957, where he was known for his remarkable decorating of his daughter’s home for all of the holidays. William was also a member of the Thomas E. Power Council #1505 of the Knights of Columbus, in Danvers. William worked 25 years as a milkman at West Lynn Creamery, he loved all the people he met, always with a wide smile of "Hello there". He loved Baseball, Travel and Politics. For many years he donated food to the Danvers Food Pantry and also Christmas presents to many needy families as "Santa”. His generous heart and zest for life was overwhelming and if you met Bill, you would never forget him. He will be sorely missed by his family and all his friends. He is survived by his children, Karen McCarthy and her husband William Phillips of Danvers, Linda Uttenweiller and her husband William of FL and Frederick McCarthy and his wife, Joanne of FL, a sister, Mary Konaxis and her late husband William of Boxford and a brother Leo McCarthy of NH, three grandchildren and 4 great grandchildren. He was predeceased by his son, Michael J. McCarthy and a brother John McCarthy. His Memorial Service will be celebrated at 1PM on Saturday, Nov. 12, 2016 at C.R. Lyons & Sons, Funeral Directors, 28 Elm St., Danvers. Visiting hours will be held Saturday prior to the service from 11AM-12:45PM in the funeral home. In lieu of flowers, memorial donations may be made to Alzheimer’s Association, 480 Pleasant St., Watertown, MA 02472.

DANVERS- William H. McCarthy, 86, passed away on November 5, 2016 in Beverly Hospital. Born in East Boston on November 27, 1929, he was the son of the late John and Elizabeth (Connolly) McCarthy. He was raised and educated in East Boston... View Obituary & Service Information

The family of William H. McCarthy created this Life Tributes page to make it easy to share your memories.