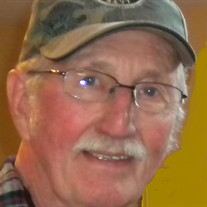 William F. Keenan, 81, died Wednesday morning, May 3, 2017 at the Kaplan Family Hospice House in Danvers following a courageous battle with Alzheimer’s Disease. He was the loving husband of Rita A. (St. Pierre) Keenan, with whom he shared nearly fifty-eight years of marriage. Born in Lynn on Feb. 15, 1936, he was the son of the late John and Lillian (Horgan) Keenan. He was raised and educated in Lynn and was a graduate of Lynn English High School. He proudly served in the U.S. Naval Reserve for twenty years. A Danvers resident since 1959, he was employed by North Shore Gas and then Boston Gas for thirty-two years until his retirement. In retirement, he enjoyed gardening, woodworking, salt and fresh water fishing, and spending time at his camp in Monson, ME. What he cherished most was spending time with his children and their families and arguing politics. He was known as the “world’s foremost authority” and will be greatly missed. In addition to his wife, he leaves his children, Kathleen and her husband Fernando Silva of Gloucester, William “Billy” and his wife Karen (Purdy) Keenan of Danvers, and Timothy and his wife Rosa (Silva) Keenan of Gloucester, his grandchildren, Jeffrey Silva and his wife Emily of Nottingham, NH, Kelsey (Silva) D’Angelo and her husband Brian of Gloucester, Jennifer (Keenan) Breznicky and her husband Eric of McKinney, TX, Amy (Keenan) Chaves and her husband Matthew of Groveland, Megan Keenan and Karina Keenan of Gloucester, his great-grandchildren, Kinsley Breznicky and Jacob D’Angelo, and another great-grandchild who is due to arrive in July. He also leaves his brother-in-law Raymond St. Pierre of TX, his sister-in-law Joan Keenan of NY, a special cousin and dear friend, Thomas O’Neil of Greenville, ME, and many beloved nieces and nephews. Besides his parents, he was predeceased by his in-laws, Adelard and Cecile St. Pierre, his beloved brother Jack, his great-grandson Joseph Breznicky, his sister-in-law Ninetta St. Pierre and his nephew Steven St. Pierre. His Funeral Mass will be celebrated on Monday, May 8, 2017 at 10AM in Saint Richard Church, 90 Forest St., Danvers. Relatives and friends are invited. Visitation is prior to the Mass from 9-9:45AM in C.R. Lyons & Sons Funeral Directors, 28 Elm St., Danvers Square. In lieu of flowers, donations in Bill’s name may be made to Care Dimensions, 75 Sylvan St., Danvers, MA 01923.

William F. Keenan, 81, died Wednesday morning, May 3, 2017 at the Kaplan Family Hospice House in Danvers following a courageous battle with Alzheimer&#8217;s Disease. He was the loving husband of Rita A. (St. Pierre) Keenan, with whom he shared... View Obituary & Service Information

The family of William F. Keenan created this Life Tributes page to make it easy to share your memories.