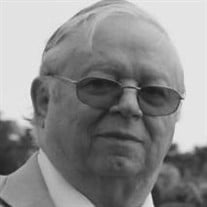 DANVERS- William F. Bowers, 88, passed away on August 3, 2018 following a brief illness. Born in Newton on February 12, 1930, he was the son of the late William K. and Dorothy (Graveson) Bowers. William was raised and educated in Newton and graduated from Newton High School in 1948. He went on to the University of Bridgeport, then to Boston University where he graduated earning his bachelor’s degree. He owned the William K. Bowers Real Estate and Insurance Agency in Newton, which his father established in 1930. Bill loved his insurance business, and deeply valued all the friendships he developed and kept. William served his country with the United States Army during the Korean War and was a member of King Solomon’s Lodge A.F & A.M., Somerville, MA. Bill was an outgoing man with many passions; Bill studied the Martial Arts; Tae-Kwon Do, Aikido and earned his black belt in Judo. He also was a “self-taught” oil painter and devoted many years to this love. He was a talented classical violinist and played other instruments as well. His many interests included playing and studying chess, and was an avid reader. He was a great encourager and example to people of all ages to step out and try something new. Adoring father of six, he is survived by five of his children, Cynthia Kennedy of Danvers, Diane Theriault and her husband, Michael of Peabody, Jonathan Bowers and his wife, Susan of Danvers, Jennifer Chirichiello of Danvers and Kenneth Bowers of Danvers. Also survived by; nine grandchildren, Joy, Jamy, Julia and Chad, Lauren, Karalyn and Melissa and Christa and Cody; nine great grandchildren, Darnell, Jacob, Lucas, Devin, Joel, Samantha, Fiona, Alice and Jesse, Predeceased by his son, William Stewart Bowers and his sister Jean and brother-in-law Robert Axelson. He also leaves nieces, nephews, and many dear friends. Bill was devoted to his Christian faith lifelong, and his love of his family will be forever cherished and missed. His Funeral Service will be held at 9AM on Friday, August 10, 2018 in the First Baptist Church, 1 Water St., Danvers. Burial will follow. Visitation will be held on Thursday from 4-7PM at C.R. Lyons & Sons, Funeral Directors, 28 Elm St., Danvers. In lieu of flowers, memorial donations may be made in William’s name to The First Baptist Church of Danvers, Education Fund, 1 Water St, Danvers, MA 01923.

DANVERS- William F. Bowers, 88, passed away on August 3, 2018 following a brief illness. Born in Newton on February 12, 1930, he was the son of the late William K. and Dorothy (Graveson) Bowers. William was raised and educated in Newton and... View Obituary & Service Information

The family of William F. Bowers created this Life Tributes page to make it easy to share your memories.