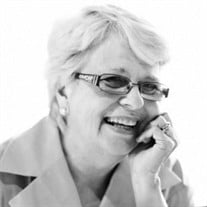 Willa D. “Billie” Berents, 79, died Monday, March 22, 2021 at her residence at Brooksby Village in Peabody. She was the wife of the late Charles N. "Skip" Berents, Jr. Born in Pittsburgh, PA on November 2, 1941, she was the daughter of the late Edward and Willa (Smith) Davison. She was raised and educated in Fox Chapel, PA and was a graduate of Aspinwall High School and Penn State University. For several years, she worked as a nursery school teacher. Billie lived for many years in Cohasset where she enjoyed singing in the choir at Saint Stephen’s Episcopal Church. She later lived in both Boston and Cambridge where she was a member of Trinity Church in Copley Square. An avid quilter, she delighted in time spent with her quilting groups. The rumor is that the Cohasset quilt group had a bit more chatting and less quilting going on, however. If there was a friend or family member expecting a baby, Billie would be hard at work making a quilt for the new arrival. Many children, some of who are now adults, were blessed with a Billie Blanket. (Raise your hand if you still have yours!) Only after she died did Blythe discover Billie had a Pinterest account, where she no doubt followed some of her favorite quilters. While she enjoyed entertaining in her Cohasset home and later in her Boston condo, she had her limits when it came to preparing meals. One memorable dinner was when she sautéed some ground beef (with no seasoning) and some onion and said “this is dinner”. Skip took one look at this and told us to get in the car to go out to dinner. Billie won the dinner battle that evening. Staying on the topic of food, she and Skip did serve up some fantastic dinner parties over the years. Once all of the kids left the house and Billie and Skip moved to the Back Bay, they loved scouring the North End for fresh pasta and other delicacies and have long evenings with dear friends, enjoying a meal with a good bottle (or two) of wine. Billie and her beloved Skip loved to travel, whether it was bike trips, vineyard and cooking tours with friends in Europe, road trips to Penn State for a football game, or yearly reunions with their Big Chill squad. Starting in the mid-90’s, she spent part of every summer in Southwest Harbor, Maine, introduced to Mt Desert Island by lifelong friends. They loved this yearly escape, which allowed them to have friends and family visit and enjoy daily hikes, bike rides, blueberry pie and lobster at Thurston’s. As a mother, Billie was up for any kind of adventure. When her daughter, Blythe, was a sophomore at Thayer Academy, there was a now infamous school trip to England and Scotland over March break. Blythe was only allowed to go if Billie could be a chaperone on the trip. The school agreed and Billie fulfilled a dream of visiting Scotland for the first time. However, I don’t know if this dream included wrangling up nearly two dozen rowdy teens partaking of a few too many pints at pubs in London and Edinburgh. For Billie’s 70th birthday, Nick planned an epic family trip to Disney World. After spending the day with her kids and grandchildren in Epcot of the Magic Kingdom, we assume she was grateful she could head to her own hotel room every evening. This was the last time we were all together as a family before her health started to decline. It’s hard to encapsulate the life force that was Billie Berents. Every person we’ve spoken with since her passing has relayed how welcome and valued she made them feel. To paraphrase her hero, the late Mr Rogers, she felt that everyone was special and deserved to be loved for who they are. As much as she loved her children, she loved her grandchildren even more. In later years, she admitted that she put up with us kids just so she could see her grandchildren. We certainly knew our place in the pecking order! She leaves three children, Nick Berents and his wife Kim of Boxford, Blythe Berents of East Boston, and Lindsey Berents Weeramuni of Jamaica Plain, five grandchildren, William, Simon, Giselle, Suki, and Arryn,and a brother, Edward “Pink” Davison of Pittsburgh.She was predeceased by two brothers, James and John Davison. Memorial Services will be held at a later date. In lieu of flowers, donations in Billie’s memory may be made to the Trinity Excellence in Education Program, 206 Clarendon St., Boston, MA 02116 or online at trinityconnects.org. Arrangements are by C.R. Lyons & Sons Funeral Directors, 28 Elm St., Danvers Square. To share an expression of sympathy with Billie’s family, please visit lyonsfuneral.com

The family of Willa D. Berents created this Life Tributes page to make it easy to share your memories.