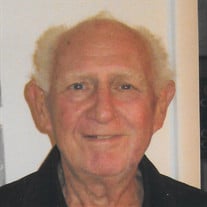 BEVERLY- Wilfred E. Gourdeau, 82, a devoted family man, passed away, peacefully in his home on September 29, 2015. He was the loving husband of Nancy J. (Skinner) Gourdeau, with whom he shared 55 years of marriage. Born on September 29, 1933 in Salem, he was the son of the late Wilfred A. and Veronique (Morin) Gourdeau. He was raised and educated in Danvers and graduated from Holten High in 1953, where he is a member of the DHS Football Hall of Fame. He received his Associate’s degree in business from Newbury Junior College. Wilfred served our country with the United States Army during the Korean War and was honorably discharged. He had been employed at General Electric in Lynn for several years prior to working as a designer and draftsman for MIT Lincoln Labs in Bedford. Upon retirement, Wilfred and Nancy wintered in West Palm Beach, Florida. Wilfred and his wife, Nancy moved to Beverly in 1961, where they raised their children. He was known as the Mayor of Beverly Hills Ave. He took great pride in his family and community and was a consummate volunteer. He coached various little league and softball teams; he was a former president of the Beverly Girls Softball League. He was involved with the Friends of Beverly High Hockey. Wilfred also volunteered at the election polls; he was active in the Ryal Side Civic Commission and the Beverly Airport Commission. Besides his wife, Nancy, he is survived by five children, Glenn A. and Carolyn Gourdeau of Beverly, Deborah J. and William Marcos of AK, Mark E. Gourdeau of Lowell, Judith F. Gourdeau of CT and Donna and Michael Loiacano of Beverly, thirteen grandchildren, Teisha and Rachael Babineau , Michelle Castiello, Julie and Jamie Block, Jake, Nicholas and Alex Marcos, Jack, Samuel and Eva Gourdeau and Sophia and Christopher Loiacano, five great grandchildren, Susannah, Salvatore, Angelo, Taylen and Alex, five siblings, Robert and Sondra Gourdeau of Leominster, Mary Gorman of Beverly, Theresa and Richard Brown of Peabody, Dianne Gourdeau of Lynn and Linda and Roger Moore of Amesbury, and many nieces and nephews. He was predeceased by his daughter, Susan A. Babineau and siblings, Rita St. Pierre and Raymond Gourdeau. His Funeral Service will be celebrated at 11AM on Friday, October 2, 2015 at C.R. Lyons & Sons, Funeral Directors, 28 Elm St., Danvers. Burial will follow in Walnut Grove Cemetery, Danvers. Visiting hours are Thurs., Oct. 1, 2015 from 5-8PM in the funeral home. In lieu of flowers, expressions of sympathy may be made in Wilfred’s name to Dana-Farber Cancer Institute, PO Box 849168, Boston, MA, 02284.

BEVERLY- Wilfred E. Gourdeau, 82, a devoted family man, passed away, peacefully in his home on September 29, 2015. He was the loving husband of Nancy J. (Skinner) Gourdeau, with whom he shared 55 years of marriage. Born on September 29, 1933... View Obituary & Service Information

The family of Wilfred E. Gourdeau created this Life Tributes page to make it easy to share your memories.