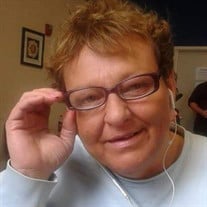 DANVERS- Wendi (Davis) Mattos, 50, passed away on June 7, 2018 in Salem Hospital. She was the mother of the late Donn D. Mattos, with whom she lost just one day prior to her death. She was also the wife of the late Donn Mattos. Born in Danvers on March 13, 1968, she was the daughter of the late Francis and Alicyn (Jardine) Davis. Wendi was raised and educated in Danvers and attended Danvers High School. She had worked as a certified nurse’s assistant and a personal care attendant for many years. She had been employed with Northeast Arc and many local nursing homes over the years. She enjoyed music and was her brothers’ biggest fan, always there for the practice sessions. A true classic rocker to the core she could sing all the oldies. Most recently she tended to the softer rock songs and had Pandora playing all the time. She also was seen as a sun worshiper always having that golden tan in the summer. She loved visits to the beaches of Beverly and Salem along with going to Salem Willows for the infamous chop suey sandwich. This brings me to her love of food; she loved to cook, especially on the holidays. She would start first thing with her banana bread and end with Chocolate cream pie and everything in between. She is survived by her daughter, Allison Mattos of Danvers, her siblings, Gayle Brunett of Danvers, Randy Davis and his wife, Maryann of Beverly, Lisa Ryan and her husband, Jeffrey of Salem, Richard Davis of Somerville, Rob Davis and his wife, Jeanne Mace-Davis of Maine, Darryl Davis and his wife Gina and Christopher Davis and his wife, Sharon of Peabody and several nieces and nephews. She was also predeceased by her brother-in-law, Arthur Brunett. Visitation will be held for both Wendi and her son, Donn on Monday, June 11, 2018 from 4-7PM at C.R. Lyons & Sons, Funeral Directors, 28 Elm St., Danvers. All other services are private. In lieu of flowers donations may be made in Wendi’s name to Beverly Bootstraps, 35 Park St., Beverly, MA, 01915. www.LyonsFuneral.com

DANVERS- Wendi (Davis) Mattos, 50, passed away on June 7, 2018 in Salem Hospital. She was the mother of the late Donn D. Mattos, with whom she lost just one day prior to her death. She was also the wife of the late Donn Mattos. Born in Danvers... View Obituary & Service Information

The family of Wendi S. Mattos created this Life Tributes page to make it easy to share your memories.