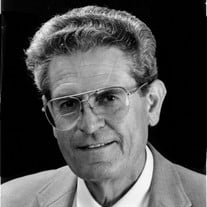 DANVERS- Warren J. D’Eon, 92, passed away on January 12, 2018 in Ledgewood Nursing Home in Beverly. He was the loving husband of Phyllis (Walfield) (Kimball) D’Eon with whom he shared 57 years of marriage. Born in Lynn on June 8, 1925, he was the son of the late Jeremy and Viola (Paul) D’Eon. He was raised and educated in Lynn and graduated from Lynn English High School. Warren had been the owner and operator of Highland Carpet, having stores in Peabody, Danvers and Saugus. Warren was also a member of the First Church in Danvers and the Danvers Lions Clubs and Rotary, with which he was instrumental in founding Haven From Hunger in Peabody. In addition to his wife, Phyllis, he is survived by his children, Jane Maihos of Danvers, Randall Kimball and his wife Donna, of Danvers, Lorraine Cody and her husband Steve, of Salem and Roger Kimball and his wife Lucia of Haverhill and fourteen grandchildren, several great grandchildren, and a few great, great grandchildren. He was predeceased by his children, Geraldine Fudge and Richard Kimball and his brother, Jerry D’Eon. His Memorial Service will be celebrated at 11:00AM on Saturday, February 3, 2018 in All Saints Episcopal Church, 46 Cherry St., Danvers. In lieu of flowers, expressions of sympathy may be made in Warren’s name to Haven From Hunger, 71 Wallis St., Peabody, MA, 01960.

DANVERS- Warren J. D&#8217;Eon, 92, passed away on January 12, 2018 in Ledgewood Nursing Home in Beverly. He was the loving husband of Phyllis (Walfield) (Kimball) D&#8217;Eon with whom he shared 57 years of marriage. Born in Lynn on June... View Obituary & Service Information

The family of Warren J. D'Eon created this Life Tributes page to make it easy to share your memories.