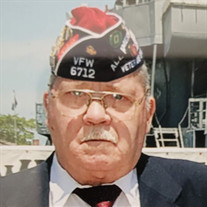 Danvers- Walter F. Portrait, 87, passed away on November 4, 2018 in the Edith Nourse Rodgers Memorial Veterans Hospital. He was the loving husband of Clara R. (Archigian) Portrait with whom he shared many years of marriage. Born in East Boston on June 17, 1931, he was the son of the late Gustave and Catherine (Gordon) Portrait. Walter was raised and educated in East Boston and graduated from East Boston High School. Walter was a soldier in United States Army during WWII and the Korean War and then continued to serve his country with a career in the Army. He retired from the United States Army in 1989, and still remained as a National Guard Army Recruiter for many years. Walter was a “heavily decorated” Veteran with two Bronze Stars, a Silver Star, a Purple Heart, a Combat Medical Badge and various Presidential Citations. He was also a member and past Post Commander of the VFW Post 6712 in Revere. Walter had resided in Lynn for many years, where he raised his family, alongside his wife Clara. He enjoyed dancing with his wife and was an avid Red Sox fan. In addition to his wife, Clara, he is survived by eight children, Deborah Portrait of Lynn, Shawn Portrait and his wife, Carol of Newbury, Michele Scribner and her husband, Robert of Center Conway, NH, Brian Portrait of Rowley, Yvette Costigan and her husband, Wayne of Danvers, Monique Cole and her husband, William of Lynnfield, Francine Ayrassian of Smithfield, RI and Bernadette Portrait of Danvers and his brother William Portrait and his wife Rose of Medford, ten grandchildren and nine great grandchildren and several nieces and nephews. He was predeceased by his siblings, John Portrait, Buddy Greene and Sissy Nowicki. His Funeral Service will be held at 10:30 AM on Friday, November 9, 2018 at C.R. Lyons & Sons, Funeral Directors, 28 Elm St., Danvers. Burial will follow at 2:30 PM in the Massachusetts National Cemetery, Bourne, MA. Visitation will be held in the funeral home prior to the service from 9:30-10:30AM on Friday morning. In lieu of flowers, donations may be made in Walter’s name to: ENRM VA Hospital, David James Hospice Unit, 200 Springs Road, Bedford, MA 01730.

Danvers- Walter F. Portrait, 87, passed away on November 4, 2018 in the Edith Nourse Rodgers Memorial Veterans Hospital. He was the loving husband of Clara R. (Archigian) Portrait with whom he shared many years of marriage. Born in East Boston... View Obituary & Service Information

The family of Walter F. Portrait created this Life Tributes page to make it easy to share your memories.