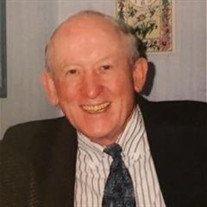 Thomas J. Foley, 81, died Sunday morning, January 22, 2017 at home in Danvers surrounded by his dedicated family. He was the loving husband of Dolores A. “Dee” (DeMatteo) Foley, with whom he shared thirty-eight years of marriage. Born in Dorchester on Sept. 13, 1935, he was the son of the late Darby and Mary (Connolly) Foley. He was raised in Dorchester and was a graduate of Boston Latin School, Boston College, and Saint John’s Seminary. Following priestly ordination, Tom was assigned to Saint Jerome Parish in South Weymouth and as a chaplain at Melrose-Wakefield Hospital. Realizing he was being called to life with a family, he left his priestly ministry and was employed at Malden Catholic High School and as a social worker for the Commonwealth of Massachusetts. A longtime Danvers resident and communicant of Saint Richard Church, Tom was a loving and dedicated father and a consummate parent volunteer at Saint Mary of the Annunciation School, Saint John’s Prep, and Nazareth Academy. He willingly donated his time to many community organizations. In addition to his loving wife, he leaves three children, Michael, Angela, and Christina Foley, all of Danvers, a brother, Jeremiah Foley of Tucson, Arizona, and several nieces and nephews. He was predeceased by his siblings James and John Foley, and Mary Connolly. His Funeral Mass will be celebrated on Thursday, January 26, 2017 at 9AM in Saint Richard Church, 90 Forest St., Danvers. Relatives and friends are invited. Visiting hours are Wednesday from 4-8PM in C.R. Lyons & Sons Funeral Directors, 28 Elm St., Danvers Square. Burial will be private. In lieu of flowers, donations in Tom’s name may be made to the Center for Older Adult Health, c/o Brigham & Women’s Hospital, 75 Francis St., Boston, MA 02115.

Thomas J. Foley, 81, died Sunday morning, January 22, 2017 at home in Danvers surrounded by his dedicated family. He was the loving husband of Dolores A. &#8220;Dee&#8221; (DeMatteo) Foley, with whom he shared thirty-eight years of marriage. Born... View Obituary & Service Information

The family of Thomas J. Foley created this Life Tributes page to make it easy to share your memories.