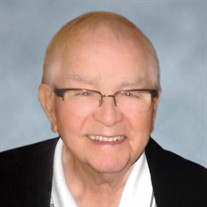 DANVERS- Thomas F. Flaherty, Jr., 87, passed away on September 30, 2018. He was the loving and devoted husband of Dorothy (Nash) Flaherty with whom he shared 66 years of marriage. Born in South Boston on February 19, 1931, he was the son of the late Thomas and Eleanor (Buckley) Flaherty. Tom was raised and educated in Boston and graduated from Boston English High School. He served our country with the United States Army during the Korean War and was honorably discharged. Tom was active within his Danvers community and had been a communicant of Saint Mary of the Annunciation Church and was also a member of the Mr. and Mrs. Club. He was a past member of the Danvers Touchdown Club. Tom worked his entire career in the fashion shoe industry with Bennett Importing in Lynn. He was an avid golfer, playing his final rounds this past summer. In addition to his wife Dorothy, he is survived by his five children, Thomas Flaherty III and his wife Patty of NH, William Flaherty and his wife Gale of NY, Kevin Flaherty and his fiancée Grace Serpa of Boxford, Beverly Flaherty and her husband David Enderwick of Peabody and Richard Flaherty and his wife Maria of NC, nine grandchildren and his brother Paul Flaherty of S. Easton. He was predeceased by two sisters, Anne Healey and Geraldine McCabe and his sister-in-law, Sheila Flaherty. His Funeral Mass will be celebrated at 9AM on Thursday, October 4, 2018 in Saint Mary of the Annunciation Church, 24 Conant St., Danvers. Burial will follow in Annunciation Cemetery. Visitation will be held from 4-7PM on Wednesday, October 3, 2018 at C.R. Lyons & Sons, Funeral Directors, 28 Elm St., Danvers. In lieu of flowers, donations may be made in Thomas’ name to Great Lakes Caring Hospice, 350 Merrimac St, Newburyport, MA, 01950.

DANVERS- Thomas F. Flaherty, Jr., 87, passed away on September 30, 2018. He was the loving and devoted husband of Dorothy (Nash) Flaherty with whom he shared 66 years of marriage. Born in South Boston on February 19, 1931, he was the son... View Obituary & Service Information

The family of Thomas F. Flaherty Jr. created this Life Tributes page to make it easy to share your memories.