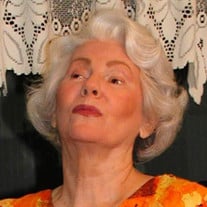 SALEM- Therese “Terri” M. (Wallace) Glickman, 87, passed away on July 10, 2016, in the Twin Oaks Nursing Home in Danvers. She was the wife of the late David M. Glickman. Born in Salem on September 7, 1928, she was the daughter of the late John W. and Mabel E. (Clements) Wallace. Terri was raised and educated in Salem and resided there until moving to Peabody to raise her family in 1965. In her younger years, she had been employed briefly as a telephone operator by the Bell Telephone Company, working alongside her mother Mabel. She also worked in the accounting office at Sylvania as a “computer”, operating mechanical calculation machines before digital computers were mainstream. One adventurous trip brought her to Lake Placid, NY where she worked at the Marcy Hotel for some time. In the 1960’s through 1980’s she became a makeup artist, working in local department stores in Peabody and Burlington. In her later years, she frequented the North Shore Shopping Center and Liberty Tree Mall where she would meet with friends for lunch. Terri was also an avid knitter. A strong presence, Terri’s sense of fashion and elegance is well remembered to all that knew her. She is survived by her son, Joel H. Glickman of NY, two grandsons, Murphy and Moses Bug and many nieces and nephews. She was predeceased by her son, William J. Bug and her three siblings, Anne Marie Mysliwy, Stella M. Kelly and John Wallace. Terri’s funeral service will be held privately. A celebration of life gathering will take place in the Salem area at a future date. Visit http://www.joelglickman.com/terri/ to be notified of the date and location. In lieu of flowers, expressions of sympathy may be made in Terri’s name to the Alzheimer’s Association, 480 Pleasant St., Watertown, MA, 02472.

The family of Therese "Terri" M. Glickman created this Life Tributes page to make it easy to share your memories.