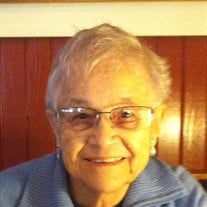 DANVERS- Theresa D. (Valcour) Barnett, 87, passed away on May 10, 2015 in Brentwood Nursing Home in Danvers. She was the beloved wife of the late Donald “Jeff” Barnett. Born in Danvers on February 26, 1928, she was the daughter of the late Harmel and Laura (Fournier) Valcour. She was a lifelong resident of Danvers. Theresa was a member of American Legion Auxiliary Unit 331 and a member of Polish, Russian, Lithuanian American Citizen’s Club, both in Danvers. She was also a communicant of Saint Mary of the Annunciation Church. She had been employed as a supervisor at Hunt Hospital. She is survived by four children and their spouses, Charles “Chuck” Barnett and Honey Beuf of Colorado, Michael and Ann Barnett of Danvers, Donna and James Laskosky of Michigan and Karen and Bruce Madden of Danvers, her brother, Donald Valcour and his wife Joyce of Danvers, her sister-in-law, Marilyn Valcour, a daughter-in-law, Jewel Barnett of Danvers, 16 grandchildren and 6 great grandchildren. She was predeceased by her son Donald Barnett, Jr. and her siblings, Victor Valcour, Roger Valcour, Albert Valcour and Jeanette Mayor. Her Funeral Mass will be celebrated at 9AM on Saturday, May 16, 2015 in Saint Mary of the Annunciation Church, Conant St., Danvers. Burial will follow in Annunciation Cemetery, Danvers. Visiting hours are Friday from 4-8PM at C.R. Lyons & Sons, Funeral Directors, 28 Elm St., Danvers. In lieu of flowers, expressions of sympathy may be made in Theresa’s name to Care Dimensions, 75 Sylvan St., Danvers, MA, 01923.

The family of Theresa D. (Valcour) Barnett created this Life Tributes page to make it easy to share your memories.