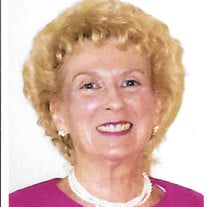 Theresa M. (LeBlanc) Manning, 89, died Sunday, May 13, 2018 following a brief illness. She was the wife of the late Gordon G. “Mike” Manning. Born in Peabody on Sept. 4, 1928, she was the daughter of the late Emanuel and Rose (Hardiman) LeBlanc. She was raised and educated in Peabody and was a graduate of Peabody High School. Mrs. Manning was employed as a telephone operator, first in Peabody with New England Telephone & Telegraph in Peabody. After marrying and relocating to Hollywood, Florida, she worked for Bell South for many years until retiring as a supervisor. She leaves her sister, Leona Santisi of Danvers, many nieces and nephews, and a dear friend, Audrey Ann Williams of Florida. She was predeceased by nine brothers and sisters, Henry, James, Peter, Edward, William, and Raymond LeBlanc, Rose Hannah, Marie Burris, and Catherine Rahilly. Her Funeral Service will be Tuesday, May 29, 2018 at 11AM in C.R. Lyons & Sons Funeral Directors, 28 Elm St., Danvers Square. Burial will follow in Annunciation Cemetery, Danvers. Visitation will be prior to the service from 10-10:45AM. In lieu of flowers, donations may be made to the charity of one’s choice.

The family of Theresa M. Manning created this Life Tributes page to make it easy to share your memories.