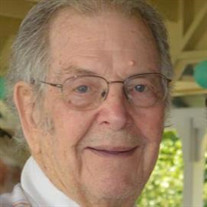 DANVERS- Thayne Foster Symmes, 98, passed away on Friday, September 21, 2018, at Rosewood Rehabilitation Center in Peabody. He was the devoted husband of the late Karin (Hurd) Symmes, with whom he shared over 70 years of marriage. Born in Marblehead on March 17, 1920, he was the son of Charles Atwood and Abbie Melissa (Southard) Symmes. He was raised and educated in Danvers and graduated from Holten High School, where he led the school band. Thayne was a member of the Amity Mosaic Masonic Lodge in Danvers, and had recently earned his 70 year pin. He was also a founder of the Danvers Chapter of the Order of DeMolay, and was a Dad Advisor for many years. He and Karin were active members of the Couples Club at Calvary Episcopal Church, and Presidents of the Shindiggers Square Dancing group. He retired as a Test Engineer in the Aircraft Engine Division, GE in Lynn, after more than 40 years. He and Karin then moved to their summer property in Essex, where they were active in the Senior Center, and longtime volunteers at Coolidge Hall at the Topsfield Fair. He is survived by his children, Susan Emerson of South Portland ME, Linda Monagle of York ME, Bruce Symmes and his wife Cathy of Danvers, and Keith Symmes and his wife Faith of Essex, and daughter-in-law, Sally Symmes of Danvers; his grandchildren, Erik and Brian Emerson and Laurel Peterson; Melissa West, Matthew Symmes and Rebecca Lee; Dennis, Julie, and Madeline Monagle; Amanda, Katie, and Jason Symmes and Meghan Beaulieu; Jessica Bowen, Jenny Johnson, and Judson Symmes; 24 great-grandchildren and numerous nieces and nephews. He was predeceased by a son David Symmes, and son-in-law, Randolph Emerson, and his siblings, Helen Love, Hazel Coleman, Gwendolyn Melanson, and Laurence and Donald Symmes. His funeral service will be held at 10:00 am on Wednesday, September 26, 2018 at All Saints Episcopal Church, Danvers. Burial is private. Visitation will be held from 4-7 pm on Tuesday, September 25, 2018 at C.R. Lyons & Sons, 28 Elm St, Danvers. In lieu of flowers, donations may be made in Thayne’s name to All Saints Episcopal Church, 46 Cherry St, Danvers, MA 01923, or American Heart Assoc., 300 5th Ave, Waltham MA 02451.

DANVERS- Thayne Foster Symmes, 98, passed away on Friday, September 21, 2018, at Rosewood Rehabilitation Center in Peabody. He was the devoted husband of the late Karin (Hurd) Symmes, with whom he shared over 70 years of marriage. Born in... View Obituary & Service Information

The family of Thayne Foster Symmes created this Life Tributes page to make it easy to share your memories.