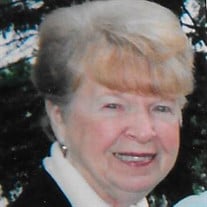 SALEM- Sylvia Synkowski, 91, widow of the late Alfred Synkowski, residing at Hathorne Hill in Danvers, died on July 4, 2016. She had resided in Salem for over 50 years prior to moving to Brooksby Village in Peabody, for nine fulfilling years. She was born in Clearwater, Minnesota, graduated from Kimball High School and attended Drew’s Business College in St. Cloud, Minnesota. She was employed in Washington, D.C. by the Civil Aeronautics Board Commerce Dept., where she met and married Alfred Synkowski, who was serving in the U.S. Navy in 1945. Sylvia worked for the Essex County Registry of Deeds in Salem for 45 years, prior to retiring in 1994 as a head administrator. She was a communicant of Saint Thomas the Apostle Church in Peabody for many years. She was also a member of the Essex County Retirement Assoc. Sylvia was so kind, so patient and so loving. She expected little and gave so much of herself to her family and to her loved ones. She had a smile for everyone. She is survived by her daughter and son-in-law, Sandra and Richard Warren of Danvers, two grandsons, Marc Warren and Wayne Warren of Seattle, WA, three great granddaughters, Ashley, Emily and Katelyn, her sister, Lilian Horejsi and her husband Leonard of Stillwater, MN, her sister-in-law, Sophie DiRubio of Danvers and many nieces and nephews. Besides her husband, Alfred, she was predeceased by her sister, Marjorie Bernd. Her Funeral Mass will be celebrated at 10AM on Saturday, July 9, 2016 in Saint Thomas the Apostle Church, Margin St., Peabody. Burial will follow in St. Mary’s Cemetery, Salem. Visiting hours will be held on Friday from 4-7PM at C.R. Lyons & Sons, Funeral Directors, 28 Elm St., Danvers. In lieu of flowers, expressions of sympathy may be made in Sylvia’s name to the American Parkinson Disease Assoc., 135 Parkinson Ave, Staten Island, NY 10305.

SALEM- Sylvia Synkowski, 91, widow of the late Alfred Synkowski, residing at Hathorne Hill in Danvers, died on July 4, 2016. She had resided in Salem for over 50 years prior to moving to Brooksby Village in Peabody, for nine fulfilling years.... View Obituary & Service Information

The family of Sylvia Synkowski created this Life Tributes page to make it easy to share your memories.