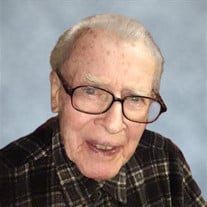 Stewart Duncan, 92, passed away peacefully on November 27th, 2018. He was a Boxford resident for over sixty years. Born in a house in Danvers in 1926, he was the son of Scottish immigrants. Stewart graduated early, with high honors, and attended Boston University on a full scholarship. He was interested in pursuing medicine but WWII called him to duty, and he served in the United States Army as an anti-tank-gunner stationed in France and Germany for the final years of the war. He then returned to B.U. and changed his concentration to Biology; earning his Bachelor’s, Master’s and a PhD in Parasitology. During this time, he met his future wife and her twin sister from Ceylon (now Sri Lanka). The two had traveled to the U.S. to attend B.U. He and Indrani Ameresekere were wed in 1954. Stewart taught in the Biology department for 41 years. He was known as a hard but fair professor with a “booming voice”. He was loved and respected by his students; maintaining many of his graduate students as friends for life. One even named a parasite he’d discovered after him; an honor he was proud of and flattered by. Stewart was a man of many talents and interests. He was a voracious reader who could speak easily on a myriad of subjects. He was an avid Red Sox, Patriots, college football, and tennis fan. He adored all things Scottish and was well versed in history and geography. His love for elephants led to a whimsical collection of items and figurines filling an entire display cabinet. He had an uncanny memory for dates, details and storytelling. He enjoyed captivating audiences with entertaining slide shows and his favorite jokes. He was a conservationist belonging to Mass Audubon for many years, and a longtime member of the Essex County Ornithological Club (ECOC). Many knew him as “The Bird Man”. An expert birder, he could be seen into his late 80’s still regularly strolling the trails at any of the local sanctuaries; most commonly the Ipswich River Wildlife Sanctuary, The Parker River National Wildlife Refuge (Plum Island), or Maudslay State Park. In his final years, his favorite pastime was feeding the wild birds at his home and watching them from his screened-in porch. Stewart is preceded in death by his wife of 44 years, Indrani Ameresekere. Surviving Stewart are his daughters, Ranee Duncan and her husband Erik Schiff of Westoborough, MA; and daughter Melanie Hendrick and her husband Russell Hendrick of Metairie, LA. Stewart was also the brother of the late Lillias Duncan and the late Robert I. Duncan. A Celebration of Life in his honor will be held at the Ipswich River Wildlife Sanctuary, 87 Perkins Row, Topsfield on Friday, May 17th at 1pm. Relatives and friends are invited to attend. Please dress comfortably as there will be an optional bird walk led by ECOC members. Tartan/plaid dress is encouraged. In lieu of flowers, donations in Stewart’s name may be made to the Ipswich River Wildlife Sanctuary, 87 Perkins Row, Topsfield, MA 01983, or either the Boxford Police Relief Association, 285 Ipswich Road, Boxford, MA, 01921, or the Boxford Firefighters Relief Association, East Fire Station, 6 Middleton Road, Boxford, MA, 01921.

Stewart Duncan, 92, passed away peacefully on November 27th, 2018. He was a Boxford resident for over sixty years. Born in a house in Danvers in 1926, he was the son of Scottish immigrants. Stewart graduated early, with high honors, and attended... View Obituary & Service Information

The family of Stewart Duncan created this Life Tributes page to make it easy to share your memories.