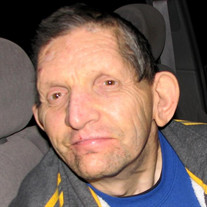 DANVERS - Stephen F. MacDonald, 65, passed away on July 7, 2019 at Beverly Hospital. Born in Lynn on April 22, 1954, he was the son of Bernice (Neilson) MacDonald and the late Francis MacDonald. He received special education services through the Seem Collaborative in Lynnfield and spent most of his life at Hogan Regional Center in Danvers, where he continued to receive services. In his early years he worked in the green house at Hogan replanting small seedlings. Stephen enjoyed horses, tractors, and helping with chores, such as making beds and shoveling snow. He also loved car rides, trips to McDonald’s, puzzles, music, dancing, and playing the piano. He had a good memory for people and places. In addition to his mother, he is survived by his siblings, David MacDonald and his wife, Ilene of Beverly, Jeanette M. MacDonald of Sarasota, Florida, and Sheila MacDonald of Swampscott; a niece and nephew, Bethany and Kevin MacDonald of Beverly; and several aunts, uncles, and cousins, as well as his extended family and loving staff at Hogan Regional Center. He was predeceased by a brother, Brian MacDonald. His Funeral Mass will be celebrated at 10AM on Thursday, July 11, 2019 in Saint Maria Goretti Church, 112 Chestnut St, Lynnfield. Burial will follow in Puritan Lawn Memorial Park, Lake St, Peabody. Visitation will be held from 4-7PM Wednesday at C.R. Lyons & Sons, Funeral Directors, 28 Elm St., Danvers. In lieu of flowers, donations may be made in Stephen’s name to Friends of Hathorne, 450 Maple Street, P.O Box A, Hathorne, Massachusetts, 01937, or to a charity of one’s choice.

DANVERS - Stephen F. MacDonald, 65, passed away on July 7, 2019 at Beverly Hospital. Born in Lynn on April 22, 1954, he was the son of Bernice (Neilson) MacDonald and the late Francis MacDonald. He received special education services through... View Obituary & Service Information

The family of Stephen F. MacDonald created this Life Tributes page to make it easy to share your memories.