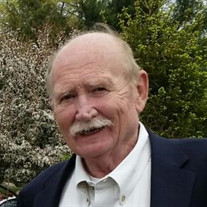 DANVERS- Stephen Graham Donovan passed away peacefully surrounded by his loving family on June 28, 2017, at the age of 72. He is survived by his wife, Nancy; daughter, Stephanie, and her husband, Michael Gargiulo; his grandsons, Zachary and Joshua; a brother, James Donovan III, and his wife, Barbara. Stephen was born on February 8, 1945, in Malden, to James Donovan, Jr. and Annabelle (Graham). He attended Saugus and Lynn public schools. After graduating from Lynn Trade High School in 1963, he attended Newman Preparatory School and Wentworth Institute. After enrolling at Northeastern University, his schooling was interrupted by military service. After an honorable discharge in 1973, he returned to Northeastern and earned a degree in Electrical Engineering. For most of his career he was employed by Thermalogic Corporation of Waltham and Hudson, MA. While in the U.S. Army, he achieved the rank of Specialist 5 as a Hawk Missile and Launcher Mechanic, repairing missile guidance packages and missile launchers. Steve was an avid gardener. It was not unusual to see him crouched down kneeling in the dirt tending to his flowers or vegetables. He took great pleasure in sharing his produce with neighbors, friends and relatives. He was a devoted animal lover always welcoming dogs and cats into his home. He loved to take his dog, Andy, out to Leominister with his father-in-law and hunt for rabbits. He loved fishing with his brother on Sluice Pond. He was always vigilant in the neighborhood striving to keep it safe. He took pride in his daughter and her many accomplishments. A visit from his grandsons never failed to put a smile on his face. As much as he enjoyed his family, he also loved solitude, alone time, and time to think and breathe by himself. His Funeral Service will be celebrated at 10AM on Thursday, July 6, 2017 at C.R. Lyons & Sons, Funeral Directors, 28 Elm St., Danvers. Burial will follow in Walnut Grove Cemetery, Danvers. The visiting hours will be held from 4-7Pm on Wednesday in the funeral home. Friends and family are welcome to join us and celebrate Steve's life. The family would like to thank the Beverly Hospital CCU for their efforts and care.

DANVERS- Stephen Graham Donovan passed away peacefully surrounded by his loving family on June 28, 2017, at the age of 72. He is survived by his wife, Nancy; daughter, Stephanie, and her husband, Michael Gargiulo; his grandsons, Zachary and... View Obituary & Service Information

The family of Stephen G. Donovan created this Life Tributes page to make it easy to share your memories.