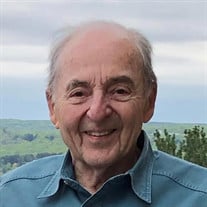 Stanley Carl Seaberg, Jr., 86, of Beverly, died Thursday, October 28, 2021 at Beverly Hospital. He was the beloved husband of Joyce M. (Cronin) Seaberg, with whom he shared sixty-one years of marriage. During those years they raised a beautiful family, traveled the country, enjoyed exploring wineries, spent time with their grandchildren and lived a blessed life. He was an amazing girl dad to 4 daughters, Lauri Robinson and her husband Scott of Herndon, VA; Christine Mahoney and her husband Daniel of Peabody; Shelley DiGiammarino and her husband Scott of Great Falls, VA and Kim Seaberg of Peabody. Stan was a proud grandfather of Amanda and Emma DiGiammarino, Chelsea and Hunter Robinson, and Halle Mahoney and was happy to share stories of them to others. Born in Beverly on July 4, 1935, he was the son to the late Stanley and Florence (Lindsay) Seaberg. He is survived by two sisters, Ann Benjamin of Lynn and Sandra Sanger of Peabody as well as several nieces and nephews. He was predeceased by his sister Karin Carlson. Stan was raised and educated in Peabody and was a 1953 graduate of Peabody High School. He was an active member of the Class of ’53 Reunion Committee. He later received a bachelor’s degree from Salem State University. He served honorably in the U.S. Coast Guard during the Korean era from 1953-1957. He was employed as a computer systems analyst at the Charlestown Naval Shipyard and then at the Portsmouth Naval Shipyard until the time of his retirement. His position afforded him the opportunity to travel to naval bases across the country. He made lifelong friendships during this time and continued these friendships with a monthly gathering of the “lunch bunch”. Stan was an avid Patriots fan and decades long season ticket holder. He especially enjoyed watching his favorite team with his daughter Kim. A passionate Formula One fan as well, he had the good fortune to attend several Montreal Grand Prix with family and friends. He was a longtime resident of Beverly and an active member of Holy Trinity United Methodist Church in Danvers. Stan was committed to serving others and volunteered as a poll worker after his retirement. A friend to many, he would encourage each of us to be the good we want to see in others. Visiting hours are Thursday, November 4, 2021 from 3-5PM at C.R. Lyons & Sons Funeral Directors, 28 Elm St., Danvers Square. All other services are private. In lieu of flowers, donations in Stan’s memory may be made to the Danvers People-to-People Food Pantry, P.O. Box 2076, Danvers, MA 01923. For directions or to leave an expression of sympathy for the family, please visit www.LyonsFuneral.com.

Stanley Carl Seaberg, Jr., 86, of Beverly, died Thursday, October 28, 2021 at Beverly Hospital. He was the beloved husband of Joyce M. (Cronin) Seaberg, with whom he shared sixty-one years of marriage. During those years they raised a beautiful... View Obituary & Service Information

The family of Stanley Carl Seaberg Jr. created this Life Tributes page to make it easy to share your memories.