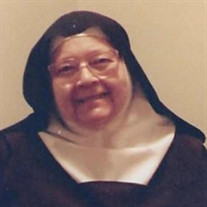 Sister Teresa Benedicta of the Cross, O.C.D., 92, a Discalced Carmelite Nun for sixty-four years, died Monday, August 10, 2020 at the Discalced Carmelite Monastery in Danvers where she had worked and prayed since coming to Danvers as one of the foundresses of the new community in 1958. Born June Alice Rahm in Chicago on May 22, 1928, she was the daughter of the late Lanna Long Rahm and the late Earl Rahm. She was raised and educated in Chicago and converted to Catholicism as a high school student with her beloved Felician Sisters. Following her studies at Loyola University where she graduated with honors, she worked for a time as a secretary at Loyola University Press before entering the Carmelite Monastery at Roxbury in 1956. However, all her life she remained a loyal Cubs fan! Sister Teresa Benedicta took first vows on Feb 26, 1958 and seven months later, left Roxbury and came to Danvers to help establish a new Carmelite Monastery. Instrumental in the foundation, Sister Teresa Benedicta’s youth and energy in the new community aided the sisters in numerous ways, willing to take on any task. From using the tractor to tend the gardens to mastering the management of the boiler room, she was committed to serving God and her community wholeheartedly. For years, before the introduction of the tape recorder, Sister put her secretarial skills to good use by recording in shorthand and later transcribing for the benefit of her Sisters, all retreats and conferences given to the community. Sister served in many roles during her sixty-two years at the monastery: as prioress, novice mistress, bookkeeper, librarian, and turn sister. She also took charge of answering all the house mail, and for years ran the hand set printing press. In the wider Carmelite community, she helped establish the Saint Teresa Association of Discalced Carmelite monasteries and for a time served as Coordinator of the Association. She leaves her beloved Carmelite sisters and several dear friends. Due to restrictions placed on gatherings, funeral rites for Sister Teresa Benedicta will be held privately and her burial will be in the Discalced Carmelite Nuns Cemetery, Danvers. A Memorial Mass for the public will be announced. In lieu of flowers, donations in Sister Teresa Benedicta’s memory may be made to the Discalced Carmelite Nuns, 15 Mt. Carmel Rd., Danvers, MA 01923. Arrangements are by C.R. Lyons & Sons Funeral Directors, 28 Elm St., Danvers Square. To share a message of sympathy, please visit www.LyonsFuneral.com.

Sister Teresa Benedicta of the Cross, O.C.D., 92, a Discalced Carmelite Nun for sixty-four years, died Monday, August 10, 2020 at the Discalced Carmelite Monastery in Danvers where she had worked and prayed since coming to Danvers as one of... View Obituary & Service Information

The family of Sister Teresa Benedicta Rahm O.C.D. created this Life Tributes page to make it easy to share your memories.