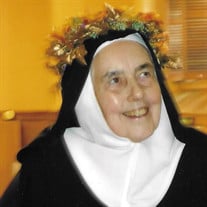 Sister Miriam of Jesus, O.C.D., 86, was called home to God on Sunday morning, May 17, 2020 in the Discalced Carmelite Monastery in Danvers, where she prayed, worked, and lived for the last sixty years. Born Barbara A. Oberti in Haverhill on August 1, 1933, she was the daughter of the late Ralph and Margaret (Cannon) Oberti. She was raised in Haverhill and graduated from Saint Elizabeth’s School of Nursing and Boston College. She worked as a registered nurse before entering the Danvers Carmel on January 31, 1960. She received the Carmelite habit on August 27, 1960 and was given the religious name Sister Miriam of Jesus. She made her vows on September 8, 1961. In the monastery, Sister Miriam gave her many gifts and talents in the service to her community. She was a skilled seamstress who made habits and vestments with care. Longtime community provisor, she found great joy working in the vegetable garden and preserving her harvest so the community had vegetables year-round. She also loved caring for the monastery’s dogs, for whom there was a special mutual affection. She served as the sacristan for many years, where her care of vestments and linens for Mass was meticulous. In this role, she was able to develop dear friendships with the many priests who celebrate daily Mass for the nuns, and she prayed especially for priests and vocations. Sister Miriam’s kindness, thoughtfulness, and patience with the younger members of the community made her a natural teacher, whether it be sharing advice about cooking, sewing techniques, or matters of faith and spirituality. Sister had a quick wit and delightful sense of humor, a special asset to any community life. She loved being with the community and pitched in generously wherever help was needed. During the past ten years as health problems made it much more difficult for her to get around, she was a beautiful inspiration to all who knew her by gracefully accepting her pain and increasing limitations, and by her persevering efforts to keep doing as much as she could for others. Her community will certainly miss her greatly. In addition to her beloved Carmelite sisters, she leaves a niece, Margaret Smithers and her children Chad and Amy and Amy’s family, and her cousins Dr. Frank Oberti and Mary Louise Conte and her family. Due to restrictions placed on gatherings, funeral rites for Sister Miriam will be held privately and her burial will be in the Discalced Carmelite Nuns Cemetery, Danvers. A Memorial Mass for the public will be announced. In lieu of flowers, donations in Sister Miriam’s memory may be made to the Discalced Carmelite Nuns, 15 Mt. Carmel Rd., Danvers, MA 01923. Arrangements are by C.R. Lyons & Sons Funeral Directors, 28 Elm St., Danvers Square. To share a message of sympathy, please visit www.LyonsFuneral.com. To view Sister Miriam’s Funeral Mass, go to https://youtu.be/BmabaUnlZS8

Sister Miriam of Jesus, O.C.D., 86, was called home to God on Sunday morning, May 17, 2020 in the Discalced Carmelite Monastery in Danvers, where she prayed, worked, and lived for the last sixty years. Born Barbara A. Oberti in Haverhill on... View Obituary & Service Information

The family of Sister Miriam Oberti O.C.D. created this Life Tributes page to make it easy to share your memories.