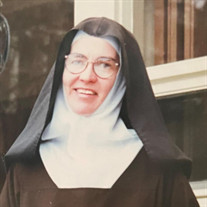 Sister Geraldine Metcalf, O.C.D., 76, was called home to God early Monday morning, August 16, 2021 at the Discalced Carmelite Monastery in Danvers where she had lived, worked, and prayed for the last thirty-three years. Born in New York City on December 12, 1944, she was the daughter of the late Ira and Lucille (Kliebe) Metcalf. She was raised in Manhattan and worked for several years for New England Telephone & Telegragh as a young woman. In 1969, she entered the Discalced Carmelite Monastery in Danvers and a year later was clothed in the Carmelite habit, receiving the religious name Sister Geraldine of Jesus and Mary. Following a call to a different ministry, she left the Monastery in 1975 to pursue work in healthcare. She worked as a nurses’ aide at St. Joseph Nursing Home in Brockton while pursuing her associate degree in nursing from Massasoit Community College and then as a staff nurse at Boston University Medical Center. She completed a bachelor’s degree in nursing in 1985 at Emmanuel College. With prayer and discernment, Sister Geraldine returned to the Carmelite Monastery and professed her vows on October 16, 1988. Over the years, Sister Geraldine held many roles within the community. As librarian, turn sister, seamstress, and gardener, she put her love of God and community into everything she did. Her unique perspective, sense of humor, and caring intelligence contributed much to community life. Despite a lengthy struggle with diminished health, Sister Geraldine was committed to participating as fully as she could in life at the monastery. In addition to her dear sisters in community, she leaves a sister, Diane Odiorne of New Hampshire, her nephews and niece, Michael, Dennis, John, and Elizabeth, and their families. Her Funeral Mass will be celebrated on Friday, August 20, 2021 at 11AM in the Chapel of the Discalced Carmelite Monastery, 15 Mt. Carmel Rd., Danvers. Burial will follow in the Discalced Carmelite Nuns Cemetery. Visitation will be in the chapel on Friday morning beginning at 10AM. In lieu of flowers, donations in Sister Geraldine’s memory may be made to the Discalced Carmelite Nuns, 15 Mt. Carmel Rd., Danvers. Arrangements are under the care of C.R. Lyons & Sons Funeral Directors, 28 Elm St., Danvers Square. To share a message of condolence, for directions, or other information, please visit www.LyonsFuneral.com.

The family of Sister Geraldine Metcalf O.C.D. created this Life Tributes page to make it easy to share your memories.