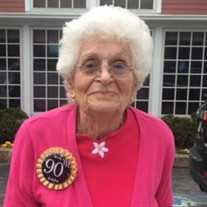 DANVERS-Shirley (Blanchard) Sayer, 90, passed away on October 15, 2019 in Kaplan Family Hospice House. She was the wife of John E. Sayer with whom she shared 67 years of marriage. Born in Woburn on April 28, 1929, she was the daughter of the late Charles and Margaret (Dukeshire) Blanchard, who were related to those on the Mayflower including the baby, Peredine White, born on that ship. She attended the Wyman School in Woburn and as a teenager before moving to Lynn. Shirley graduated from Lynn English High School in 1946. She was the secretary of her class, both junior and senior years and SNDF Co-Chair of every class reunion for 65 years. Shirley had worked at John Hancock Life Insurance in Boston, prior to raising her family of three; Scott, Glenn and Kristin. Shirley, like her husband, Jack, was involved in all the children’s’ activities, which included church groups, school band, scouts and dancing. Shirley and Jack were also avid dancers themselves. The whole family also enjoyed many camping trips, and for many years Shirley and Jack traveled around the country in their RV. While the children were young, Shirley worked evenings selling Dutchmaid clothing for 23 years, which was made by the Amish in Pennsylvania. After which, she became employed in customer service and manager of the safe deposit area at the former Danvers Savings Bank. She became president of the American Safe Deposit Association for both the New England Association and National Association. She attended local meetings and national seminars across the country until her retirement. Upon retirement, Shirley started crafting and was a local vendor for over 25 years. Shirley was also very active in the Order of the Eastern Star, where she was worthy matron in the Danvers Chapter of Mt. Burnet, twice. Upon consolidation with Tontoquon Chapter, she became their secretary for 9 years. She had been an active member of the Holy Trinity Methodist Church in Danvers for over 50 years. Besides her husband, Jack, she leaves her son, Glenn of Amesbury and her daughter, Kristin Sayer and her husband, Michael Charland of NH, her grandchildren, Andrew Scott Sayer of Lynn, Michael Kelly of FL, Nicole Morris Whalen and her husband, Josh of Beverly and a great grandson, Jason Pierce of Beverly, her only sister, Charlotte Bell and her husband, James of Lynn, her nieces, Heidi Williams, Boni Bell and Betsi Bell and two great nieces, Abby and Ali Williams. She was predeceased by her son, Scott Sayer. Her Funeral Service will be celebrated at 11AM on Monday, October 21, 2019 in Holy Trinity Methodist Church, 16 Sylvan St., Danvers. Burial will follow in Puritan Lawn Memorial Park, Peabody. Visitation will be held from 4-7PM on Sunday. In lieu of flowers donations may be made in Shirley’s name to the Shriners Hospital for Children Development Office, 51 Blossom St., Boston, MA 02114.

DANVERS-Shirley (Blanchard) Sayer, 90, passed away on October 15, 2019 in Kaplan Family Hospice House. She was the wife of John E. Sayer with whom she shared 67 years of marriage. Born in Woburn on April 28, 1929, she was the daughter of the... View Obituary & Service Information

The family of Shirley B. Sayer created this Life Tributes page to make it easy to share your memories.