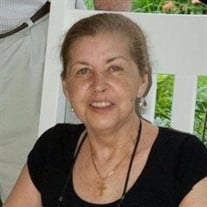 Sallyanne (St. Claire) Nicholson, 74, died Tuesday, April 18, 2017 at her home surrounded by her loving family. She was the wife of William L. Nicholson, with whom she shared fifty-six years of marriage. Born in Lynn on Nov. 22, 1942, she was the daughter of the late Edward and Sophia (Chigas) St. Claire. Sallyanne was raised and educated in Danvers and was a graduate of Holten High School, Class of 1960. She furthered her education at the Chandler School for Women. A member of the Danvers Garden Club for many years, she also sang in the choir at Saint Vasilios Church in Peabody. While raising her children, she was a Den Mother for Cub Scout Pack 92 and later served on the executive committee of Boy Scout Troop 92 at the First Church of Danvers. She was an avid Red Sox fan. In addition to her husband, she leaves her children, William Nicholson, Jr. and his fiancée Andrea of Winchester and Jennifer Smith and her husband Richard of Danvers, her grandchildren, Sarah and Mary Nicholson and Richard J. “R.J.” and Alexander Smith, her siblings and their spouses, Deborah and Bill Nicolini, Harry and Sandra St. Claire, and Peter and Lisa St. Claire, all of Danvers, and many nieces and nephews. Her Funeral Service will be held on Monday, April 24, 2017 at 10AM in Saint Vasilios Church, 5 Paleologos St., Peabody. Burial will follow in Walnut Grove Cemetery, Danvers. Relatives and friends are invited. Visiting hours are Sunday from 3-7PM in C.R. Lyons & Sons Funeral Directors, 28 Elm St., Danvers Square. In lieu of flowers, donations in Sallyanne’s name may be made to St. Jude Children’s Research Hospital, 501 St Jude Pl., Memphis, TN 38105.

Sallyanne (St. Claire) Nicholson, 74, died Tuesday, April 18, 2017 at her home surrounded by her loving family. She was the wife of William L. Nicholson, with whom she shared fifty-six years of marriage. Born in Lynn on Nov. 22, 1942, she... View Obituary & Service Information

The family of Sallyanne Nicholson created this Life Tributes page to make it easy to share your memories.