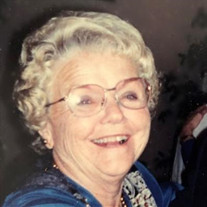 Ruth A. (Carbrey) Devarenne, 91, died Friday morning, Feb. 1, 2019 at Care One at Essex Park in Beverly following a lengthy illness. She was the wife of John A. Devarenne, with whom she shared sixty-eight years of marriage. Born in Peabody on Feb. 17, 1927, she was the daughter of the late Edward and Anna Carbrey. She was raised and educated in Danvers and was a 1945 graduate of Holten High School. She went on to Salem State College where she graduated in 1949. Ruth was an elementary school teacher who taught at the Glover School in Marblehead and Wadsworth School and Saint Mary of the Annunciation School in Danvers. For over forty years, she was an active member of the LaSalette Faith Community where she served as a eucharistic minister and was involved with Marriage Encounter. She volunteered for fifteen years with the Danvers Senior Center and with Meals on Wheels. Active in senior council affairs, she volunteered to be a companion to elderly shut-ins. A lifelong Danvers resident, she and her husband enjoyed traveling to Cape Cod and coastal Maine in the summer, and in colder months taking the train to Florida to visit their daughters. Her greatest accomplishment was raising her five children and six grandchildren. In addition to her husband, she leaves four daughters and sons-in-law, Lynda and Ron Barry, Susan and Charles Gautier, Patricia and John Heaphy, and Laurie and Don King, a son and daughter-in-law, John E. and Kelly Devarenne, six grandchildren, Sean Barry, Alexandra Heaphy, Kaitlyn and Zachary King, Kyle Devarenne, and Eric Tobey, four great-grandchildren, Brian, Grace, Annie, and Nathan, and many nieces and nephews. She was predeceased by her siblings, Marie Ciman and Edward Carbrey. Ruth’s family is grateful to the staff at Care One at Essex Park for the love and care they showed to Ruth during her illness, with a special thanks to “Connie” who was her dedicated aide. Her Funeral Mass will be celebrated on Weds., February 6, 2019 at 9AM in Saint Mary of the Annunciation Church, 24 Conant St., Danvers. Burial will follow in Annunciation Cemetery. Relatives and friends are invited. Visiting hours are Tuesday from 4-7PM in C.R. Lyons & Sons Funeral Directors, 28 Elm St., Danvers Square. In lieu of flowers, donations may be made to Care Dimensions, 75 Sylvan St., Danvers, MA 01923 or the LaSalette Faith Community, P.O. Box 210, Topsfield, MA 01983.

Ruth A. (Carbrey) Devarenne, 91, died Friday morning, Feb. 1, 2019 at Care One at Essex Park in Beverly following a lengthy illness. She was the wife of John A. Devarenne, with whom she shared sixty-eight years of marriage. Born in Peabody... View Obituary & Service Information

The family of Ruth A. Devarenne created this Life Tributes page to make it easy to share your memories.