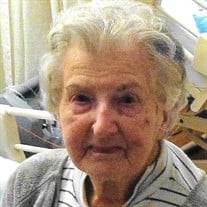 BEVERLY – Ruth Putnam (Dempsey) Danforth of Beverly passed peacefully at Ledgewood Nursing Home on December 13, 2016 following a brief illness. She was the wife of the late Captain Paul C. Danforth, USNR Ret., with whom she shared 47 years of marriage. She was the daughter of the late Mary Alice (Putnam) Dempsey of Danvers and James Dempsey of Salem. Ruth was born in Danvers on February 4, 1918. She attended Danvers schools and graduated from the Mass. College of Art. Her career included working for the studios of George Abdo and Emile Devoe of Salem. Ruth was a devout Christian and attended Calvary Episcopal Church, where she was married on February 22, 1941, and in later years, the Beverly Gospel Mission. She lived her faith and after her husband passed in 1988, Ruth opened her heart and home to people in need to whom she ministered and helped overcome their struggles. She was an animal lover as well. Everyone who knew Ruth knew that she was never happier than when she was in her garden. She was a talented artist who carried out her love of beauty and color in her garden. It was her passion and another talent. She had rose bushes that had been her mother’s and were well over 100 years old. She was predeceased by her husband, two infants and her grandchildren Erika Ghidoni and Bonnie Ann Danforth. She is survived by her four children, Carole Danforth of Raynham, Gayle Otis (Bill Picard) of Beverly, Paul Danforth (Cathleen) of North Berwick, ME, and Charles Danforth (Sheri) of Danvers. Ruth was devoted to her family and leaves her grandchildren, Donald Edinger (Tammy) of Dighton, Melissa Danforth (Eamonn Travers) of Boston, Lauren Danforth-Nemirovsky (Daniel) of Mansfield, Sarah Kate Danforth of Austin, TX, Charles Danforth, Jr., and Bethany Danforth of Danvers, several great grandchildren, three great grandchildren, special friends, Jack and Roz Celentano of Florida, and her cat, Harry. Her Funeral Service will be held at 11AM on Saturday, December 17, 2016 at C.R. Lyons & Sons, Funeral Directors, 28 Elm St., Danvers. Visitation will be held prior to the service from 10AM-10:45AM on Saturday in the funeral home. Burial will follow in Walnut Grove Cemetery, Danvers. In lieu of flowers expressions of sympathy may be made in Ruth’s name to a charity of one’s choice.

BEVERLY &#8211; Ruth Putnam (Dempsey) Danforth of Beverly passed peacefully at Ledgewood Nursing Home on December 13, 2016 following a brief illness. She was the wife of the late Captain Paul C. Danforth, USNR Ret., with whom she shared 47... View Obituary & Service Information

The family of Ruth Putnam Danforth created this Life Tributes page to make it easy to share your memories.