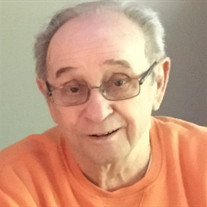 Adolfo C. “Rudy” Gallucio, 90, entered into eternal rest on Saturday, July 15, 2017 surrounded by his loving family: his wife of nearly 64 years, Dolores (Freda) Gallucio, his daughter Camille Gallucio and her fiancé Terrance Keilty of Lynn, his son Dominic Gallucio of Florida and Dorchester, his daughter Doreen Deletetsky and her husband Martin of Middleton, and his 3 grandsons Nicholas, Joseph, and Dominic Deletetsky. Rudy lived life to the fullest--known as Mr.Jolly. His love for dance, laughter and singing was with him until the very end. He enjoyed traveling with his family, Sunday dinners at his home with his family, joking around with Nicholas, Joseph and Dominic, and worshiping his wife for 64 years. Born in Everett on March 2, 1927, he was the son of the late Andre and Carmela (Dascoli) Galluccio. He was raised and educated in Everett and served honorably in the U.S. Navy during WWII. A longtime Peabody resident, he was employed for many years by General Electric at the River Works plant in Lynn. Following his retirement, Rudy was the proprietor of G’s Running Service. Also the special uncle and papa to Camille Freda, Steven Levin, Anthony Levin, and Emily Levin, as well as his many nieces and nephews. He also leaves two sons, Andre and Rudolph Gallucio. Funeral Services were held privately. In lieu of flowers, donations in Rudy’s name may be made to the Kaplan Family Hospice House, 78 Liberty St., Danvers, MA 01923.

The family of Rudy Gallucio created this Life Tributes page to make it easy to share your memories.