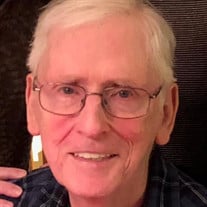 DANVERS- Ronald J. Mahoney, 84, passed away on May 28, 2021 in his home. He was the husband of the late Eleanor (Binda) Mahoney. Born in Boston on February 7, 1937, he was the son of the late William and Kathleen (Kemmitt) Mahoney. He was raised and educated in Everett and graduated from Everett High School in 1955. Ronald served our country with the United States Army providing security for the Panama Canal and later the Massachusetts National Guard. He raised his family in Danvers, and had lived in Beverly for several years before moving back to Danvers. He enjoyed spending time with famIly in York, Maine for many years, where he was a charter member of Ramsdell Rogers American Legion Post. He had a long career as a truck driver and worked for General Electric and Ametek. Ronald enjoyed fishing and country dancing. He is survived by his four children, Victoria Fumarola and her husband, Keith of Beverly, Ronald Mahoney Jr. and his wife, Mary of Marlton, NJ, Jennifer Kimmel and her husband Glen of Ipswich and Kristin Bresnahan and her husband Jason of Peabody, his sister, Kathleen Gatto of AZ and twelve grandchildren, Brandon, Zachary, Alex, Jordan, Justin, Patrick, Collin, Carissa, Makayla, Carri, Kate and Leah. He was predeceased by his siblings, William Mahoney, Jr. and Dorothy Belliveau. Ronald’s family is grateful for the care that was given by the staff at Brightview Danvers and Care Dimensions. His Funeral Service will be held at 11am on June 4th, 2021 at Community Covenant Church, 33 Lake St., Peabody. Burial will follow in Annunciation Cemetery, Hobart St., Danvers. Visitation will be held from 4-7PM on June 3, 2021 at C.R. Lyons & Sons, Funeral Directors, 28 Elm St., Danvers. In lieu of flowers donations may be made in Ronald’s name to Voices of Hope, 171 Park St., Stoneham, MA, 02180 or Care Dimensions, 75 Sylvan St., Danvers, MA, 01923.

DANVERS- Ronald J. Mahoney, 84, passed away on May 28, 2021 in his home. He was the husband of the late Eleanor (Binda) Mahoney. Born in Boston on February 7, 1937, he was the son of the late William and Kathleen (Kemmitt) Mahoney. He was... View Obituary & Service Information

The family of Ronald J. Mahoney created this Life Tributes page to make it easy to share your memories.