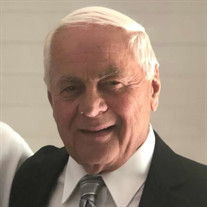 Roland A. Demers, 80, of Topsfield, died peacefully on Tuesday morning, March 9, 2021 at the Kaplan Family Hospice House in Danvers. He was the beloved husband of Carole J. (Feroli) Demers, with whom he shared fifty-one years of marriage. Born in Lynn on Jan. 24, 1941, he was the son of the late John and Helen (Zachko) Demers. Raised in Peabody, he was a graduate of Saint Mary’s High School in Lynn. Rolly followed in his father’s footsteps, entering the trade of carpentry and worked as a carpenter until the time of his retirement. Never one to slow down, he then worked at Wayne Alarm in Lynn for several years. An avid skier, it was during his years on the slopes as a young man that he was introduced to Carole Feroli, the beautiful lady who would become his wife and partner through life. A Saugus resident for nearly twenty years—living in a home he built and lovingly maintained for his family—Rolly enjoyed spending time with his son when he was not hard at work, volunteering his time as manager of the North Shore Raiders and never missing a game or practice. In his later years, the role he most enjoyed in life was being “Papa” to his adoring granddaughters. He also loved spending time with his four-legged best pal, Buddy. In addition to his wife, he leaves a loving son and daughter-in-law, Roland and Keri Demers II of Topsfield, and two cherished granddaughters, Ava and Madelyn. He also is survived by two sisters, Charlene and Janice, and several nieces and nephews. He was predeceased by a brother, John Demers, Jr. Visiting hours are Thursday, March 11, 2021 from 5-7PM in C.R. Lyons & Sons Funeral Directors, 28 Elm Street, Danvers Square. A graveside service will be held on Friday, March 12, 2021 at 1PM in Annunciation Cemetery, 155 Hobart St., Danvers. Attendees are asked to wear face coverings and practice social distancing. Donations in Roland’s name may be made to the Alzheimer’s Association, 309 Waverley Oaks Rd., Waltham, MA 02452 or online at alz.org. To share an expression of sympathy with Roland’s family, please visit www.LyonsFuneral.com.

Roland A. Demers, 80, of Topsfield, died peacefully on Tuesday morning, March 9, 2021 at the Kaplan Family Hospice House in Danvers. He was the beloved husband of Carole J. (Feroli) Demers, with whom he shared fifty-one years of marriage. Born... View Obituary & Service Information

The family of Roland A. Demers created this Life Tributes page to make it easy to share your memories.

Roland A. Demers, 80, of Topsfield, died peacefully on Tuesday...