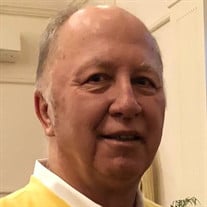 Roger J. Pawlyk of Danvers, entered into rest on May 1, 2020 at the age of 73. Born in Salem, MA to the late Thomas Pawlyk and Julia (Swensiski) Pawlyk, he grew up in Collins Cove and graduated from Salem High School, class of 1964. He later graduated from Northeastern University with an Associate’s Degree in Business Administration. He enlisted in the United States Navy during the Vietnam era and was honorably discharged in 1971. Roger worked for the Federal Government’s Department of Defense until his retirement in 1998 as the Government Branch Chief of Contracts. He later enjoyed post retirement positions at the Lynn Postal Credit Union and Marblehead’s National Grand Bank. Raising his boys in Salem with former spouse Karen, Roger enjoyed every moment with his sons Jay and Christopher as well as their friends Dave and Chuck Angeramo and John McCormick. Roger was happiest playing catch with his kids for hours after work, hosting interminable neighborhood Monopoly games, two memorable trips to the Baseball Hall of Fame, playing makeshift mini-golf in the front yard, and wild games of neighborhood hoops. He was a fixture at his own sons’ Little League games and those of the neighborhood boys, and when his sons took up the game of golf, he was at every match cheering them on. Becoming a grandfather was an even greater source of pride for Roger. His friends endured viewing countless pictures and videos of his grandchildren, and he always seemed to entice them to attend his grandchildren’s plays (he always needed 5-6 tickets!). Dzi-Dzu (“grampy” in Polish) never missed a pre-school graduation, recital, concert, play, and any chance to share a meal, a catch, or a ballgame at McCoy Stadium with his grandchildren. Nothing brought him greater joy than seeing his grandchildren happy. He loved the anarchy of family gatherings, the singing, the “good coffee,” and having a willing audience for his really bad jokes. Later in his life, he was surrounded by so much love from his friends, especially his best pal Peter Carlin, his morning coffee group at the mall, his breakfast buddies, Thursday night trivia, and his beloved Parkinson’s support group. Wherever he went, he became everyone’s friend. Roger’s much-loved family included his son Jay L. Pawlyk, daughter-in-law Laura and grandchildren Julia and Daniel of Peabody, his son Christopher J. Pawlyk and his grandson Brody of Rhode Island. He was the beloved brother of Gloria Pawlyk of Beverly, MA and Thomas Pawlyk and his wife Barbara of Wenham, MA as well as the loving uncle of Randall Pawlyk and Matthew Pawlyk. Visiting hours are Monday, August 3, 2020 from 4-7PM in C.R. Lyons & Sons Funeral Directors, 28 Elm St., Danvers Square. All other services are private. Attendees at the visitation or service are required to wear face coverings, practice social distancing, and are respectfully asked for no physical contact with the family. Since Roger was the consummate sports fan, an expression of sympathy may be made in Roger’s name to the Jimmy Fund C/O Dana Farber Cancer Institute, P.O. Box 849168, Boston, MA 02284-9168. For directions or to leave a message of condolence, please visit www.LyonsFuneral.com.

Roger J. Pawlyk of Danvers, entered into rest on May 1, 2020 at the age of 73. Born in Salem, MA to the late Thomas Pawlyk and Julia (Swensiski) Pawlyk, he grew up in Collins Cove and graduated from Salem High School, class of 1964. He later... View Obituary & Service Information

The family of Roger J. Pawlyk created this Life Tributes page to make it easy to share your memories.