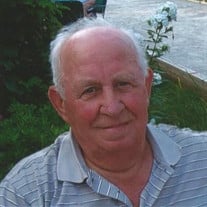 Rocco Cobuzzi, 79, of Danvers, passed away peacefully on June 28, 2017 surrounded by his family. He was born in the small mountaintop town of Panni, Foggia, Italy on August 15, 1937. During his youth, Rocco worked as a farmer. In May of 1962, joining his wife Maria, Rocco came to the United States seeking opportunity. Through hard work and determination he started first as a mason, then became a licensed barber in Salem for 5 years. In 1968 Rocco and his two brothers-in-law, Mike and Joe Ciruolo, opened Rocco’s Pizza in Danvers square. The business was operated by the three until 1979 when Rocco ventured out on his own and opened Rocco's Family Variety on Purchase Street. Rocco operated the deli/restaurant/convenience store with his family for seven years. Rocco then entered the construction business with his son, Frank, building residential homes on the North Shore. After several years, Rocco returned to his love of the food business and opened Premiere Deli and Catering in Danvers. He operated that establishment until his retirement in 2003. Rocco enjoyed his family and involved them in all of his adventures. Rocco courageously battled many health ailments over the past 20 years with the same spirit and determination that brought him success in America. His latest challenge, requiring regular dialysis treatments, he claimed was "the hardest job" he ever had. Rocco was an active member of the Danvers Senior Center. He had so much respect and praise for the center's staff and was grateful for all their service, particularly making it such a friendly, welcoming place to go. Rocco met so many wonderful people on his visits and developed many lasting friendships. His major interests included playing competitive bocce, dancing, listening to music, working the grill at the barbecues, and socializing with friends. Rocco is survived by his wife of 58 years, Maria (Ciruolo) Cobuzzi and four children: Frank Cobuzzi and his wife Tricia of Danvers, Tony Cobuzzi and his wife Julie of Boston, Don Cobuzzi and his partner Julie Ellis of Danvers, and Lena Winston and her husband Matthew of Hamilton. He leaves seven grandchildren: Nouelle Farid; Morgan and Sophia Cobuzzi; Michael and Christina Cobuzzi; Rebecca and Gabriella Winston. Rocco is also survived by six siblings: Antonio Cobuzzi of Danvers; Giuseppina Lapolla, Luigi, and Carmelo Cobuzzi of Montreal, Canada; Maria Cacchiotti and Paolo Cobuzzi of Italy. He leaves many nieces, nephews, cousins and extended family. Rocco was predeceased by his parents Francesco and Donata (Melino) Cobuzzi, his brother Michele Cobuzzi and sister Sarafina Cobuzzi. His Funeral Mass will be Monday, July 3, 2017 at 10AM in Saint Richard Church, 90 Forest St., Danvers. Burial will follow in Annunciation Cemetery, Danvers. Relatives and friends are invited. Visiting hours are Sunday from 3-7PM in C.R. Lyons & Sons Funeral Directors, 28 Elm St., Danvers. In lieu of flowers memorial donations may be made to the Friends of the Danvers Council of Aging Transportation Fund, 25 Stone St., Danvers, MA 01923 or Saint Richard Church, 90 Forest St., Danvers, MA 01923.

Rocco Cobuzzi, 79, of Danvers, passed away peacefully on June 28, 2017 surrounded by his family. He was born in the small mountaintop town of Panni, Foggia, Italy on August 15, 1937. During his youth, Rocco worked as a farmer. In May of 1962,... View Obituary & Service Information

The family of Rocco Cobuzzi created this Life Tributes page to make it easy to share your memories.

Rocco Cobuzzi, 79, of Danvers, passed away peacefully on June...