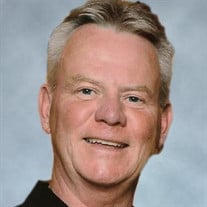 Robert B. White, 57, of Danvers, died Friday evening, November 22, 2019 at the Lahey Hospital in Peabody. He was the husband of Patricia A. (Acres) White. Born in Leicester, England on June 14, 1962, he was the son of Doreen M. (Boland) (White) O’Leary of Danvers and the late Robert F. White, Jr. He was raised and educated in Danvers and was a 1980 graduate of Danvers High School. Bob was an accomplished master plumber who worked throughout the North Shore. He was also active in the operation of his family business, Vic’s Catering. He was a member of the Knights of Columbus, Vallodolid Council #70 in Lynn and the Polish Club in Danvers. He was a great neighbor and dedicated friend, who was always willing to lend a hand. In addition to his loving wife and mother, he leaves two step-children, Jessica Danehy of Beverly and Michael MacDougall of Louisiana, his grandson, Trey Danehy, his sister, Terri White and her fiancé Ken Granlund of Danvers, two brothers, Shawn and Mark White, both of Danvers, his father-in-law, Frederick Acres, his sister-in-law, Sharon Ozereko and her husband Stan, his brother-in-law, Ken Acres, two nieces, Makenzie Hackett and her fiancé Daniel Robichau and Maryfrances White, and his grandniece and Goddaughter, Aurora Robichau. He also leaves his loving extended family and a host of dear friends. He was predeceased by his step-father, James O'Leary, and a brother-in-law, Daniel Hackett. His funeral service will be held on Monday, December 2, 2019 at 11AM in C.R. Lyons & Sons Funeral Directors, 28 Elm St., Danvers Square. Burial will follow in Annunciation Cemetery, Danvers. Visiting hours are Sunday, December 1, 2019 from 4-7PM in the funeral home. For directions or to leave a message of condolence, please visit www.LyonsFuneral.com.

The family of Robert B. White created this Life Tributes page to make it easy to share your memories.