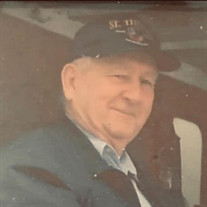 IPSWICH-Robert L. Wheatley, Jr., 89, passed away on November 6, 2021 in the Kaplan Family Hospice House. He was the loving husband and best friend of Janet (Sherwood) Wheatley with whom he shared 61 years of marriage. Born in Middleton on July 8, 1932, he was the son of the late Robert and Flora (Fournier) Wheatley. He was raised and educated in Middleton and graduated from Holten High School, and Wentworth Institute in Boston. Robert proudly served his country with the United States Army during the Korean War in the Tank Battalion Hell on Wheels and was honorably discharged. He had been employed as a carpenter for the MBTA for 32 years and a member of AFL/CIO. Robert was a skilled carpenter and enjoyed woodworking and building furniture for his wife and daughters. He built much of his home in Middleton, where they had resided for 12 years, prior to retiring to Ipswich. In addition to his wife, Janet, he is survived by his devoted daughter and son-in-law, Laura and Derek Sears of Danvers, a grand-dog Cassie and grand-cat, Cash, a daughter Pamela Newport and her husband, Dean of Boxford, and his grandsons, Wyatt and Carter, whom he was extremely proud of. He was predeceased by his siblings, David Wheatley and Shirley Berner. He leaves nieces and nephews and close cousin, Richard Pelletier of Danvers. Robert and his wife enjoyed travelling and dining with wonderful friends, trips to Foxwood, Europe and adventures to Disney sites with his grandsons. Robert appreciated the wonderful support he received from his aides, especially Nancy, and therapists Meaghan and EJ who allowed him to enjoy his home as long as possible with Cassie by his bedside. A graveside service with military honors will be held at 11AM on Friday, November 12, 2021 in Oakdale Cemetery, Middleton. In lieu of flowers donations may be made in Robert’s name to Bedford VA, 200 Spring Rd, Bedford, MA, 02151 or Care Dimensions, 75 Sylvan St., Danvers.

IPSWICH-Robert L. Wheatley, Jr., 89, passed away on November 6, 2021 in the Kaplan Family Hospice House. He was the loving husband and best friend of Janet (Sherwood) Wheatley with whom he shared 61 years of marriage. Born in Middleton on July... View Obituary & Service Information

The family of Robert L. Wheatley Jr. created this Life Tributes page to make it easy to share your memories.