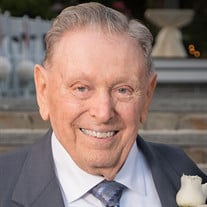 Robert E.L. West, 86, died Monday afternoon at the Kaplan Family Hospice House. He was the husband of the late Mary (Mitchell) West. Born in St. Mary’s, West Virginia on Nov. 17, 1931, he was the son of the late Howard and Foye (Dotson) West. He was raised and educated in West Virginia and graduated from the U.S. Coast Guard Academy in 1953. Following his time in the service, he was employed by New England Telephone for nearly thirty years. A longtime Westwood resident where he was a member of Saint Denis Church, Bob resided in Topsfield for several years following the death of his late wife and recently made his home at Colonial Gardens in Beverly. He was a member of the Telephone Pioneers and had been active for many years in the Coast Guard Reserves. He was an avid train enthusiast and loved dogs. He leaves a son, Greg West and his wife Melissa of Danvers, his grandchildren, Katelyn Breen and her husband Andrew, Timothy Bopp and his wife Michelle, Michael Devlin, and Maggie Devlin, three great-grandchildren, Alyssa, Lilly, and Aubrey, and his loving partner, Ethel M. Farmer. He was predeceased by his daughter, Donna Lee Bopp, and his brother, George West. A Graveside Service will be held on Saturday, August 11, 2018 at 11AM in New Westwood Cemetery, High St., Westwood. Relatives and friends are invited. Visiting hours are Friday from 5-8PM in C.R. Lyons & Sons Funeral Directors, 28 Elm St., Danvers Square. In lieu of flowers, Donation may be made to the Coast Guard Academy Alumni Association, 47 Mohegan Ave., New London, CT 06320-8111. Please note for the Class of ’53 Endowment.

Robert E.L. West, 86, died Monday afternoon at the Kaplan Family Hospice House. He was the husband of the late Mary (Mitchell) West. Born in St. Mary&#8217;s, West Virginia on Nov. 17, 1931, he was the son of the late Howard and Foye (Dotson)... View Obituary & Service Information

The family of Robert West created this Life Tributes page to make it easy to share your memories.