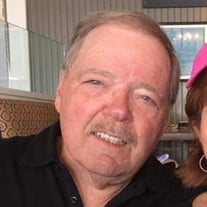 PEABODY—Robert E. Weaver, 79, of Peabody, died Saturday, February 15, 2020 at Mass General Hospital following a brief illness. He was the loving husband of Linda (Yonis) Weaver, with whom he shared twenty-four years of marriage. Born in Ipswich on June 6, 1940, he was the son of the late Edwin and Antoinette (Demers) Weaver. He was raised and educated in Danvers and had been a resident of Peabody for more than thirty years. Bob served honorably in the U.S. Army in the early 1960s. Bob loved his work as a machinist and was still working at GTG in Middleton until his recent illness. He had previously been employed at R&K in Middleton and the United Shoe in Beverly. He was a member of Post #220 JWV of Peabody, a member of Congregation Tifereth Israel, and a former member of the Knights of Pythias. An avid New England Sports fan, Bob loved watching his New England Patriots. He also enjoyed golf, travel, fishing, and time spent at the Martin Burns Range. He was always willing to lend a hand to a friend in need and was beloved by family and friends for his positive outlook on life. In addition to his wife, he leaves six children, Leslie Curley of Georgetown, Stacey Weaver of Beverly, Timothy Weaver of Peabody, Kelly Fitzgerald of Rowley, Heather Fejes of Georgetown, and Josh Rowen and his wife Cecile of Danvers, his brother, William Weaver and his wife Sandra of NH, his sister, Jackie Tompkins and her husband Dick of NJ, his grandchildren, Christina, Marleina, Kim, Victor, James, Geoffrey, Abby, Jaysen, and Shayna, and seven great grandchildren, as well as many niece, nephews, and dear friends. His Funeral Mass will be celebrated on Friday, February 21, 2020 at 11AM in Saint Mary of the Annunciation Church, 20 Conant St., Danvers. Burial will follow in Sons of Jacob Cemetery 16 Buxton Rd, Danvers. Relatives and friends are invited. Visiting hours are Thursday from 4-7PM in C.R. Lyons & Sons Funeral Directors, 28 Elm St., Danvers Square. In lieu of flowers, donations in Bob’s name may be made to the American Heart Association, 300 5th Ave, Waltham, MA 02451 or the Disabled American Veterans, 29 Pleasant St., Braintree, MA 02184. For directions or to leave a condolence, please visit www.LyonsFuneral.com

The family of Robert E. Weaver created this Life Tributes page to make it easy to share your memories.