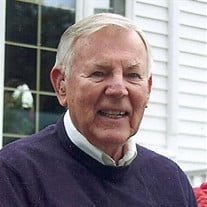 Robert H. Parsons, 85, died Friday evening, September 4, 2015 at his home surrounded by his loving family. Affectionately known as Bob, he was the husband of E. Marilyn (Watkins) Parsons, with whom he shared 56 years of marriage. Bob was born in Woburn on November 15, 1929. He was the son of the late James and Ellen Parsons. Because of the early death of his mother in 1936, he spent five years with the New England Home for the Little Wanderers. He came to Danvers in the seventh grade and graduated from Holten High School in 1947. He was president of his class and a varsity athlete. He continued his education at Northeastern University, graduating in 1952. In 1960 he received his Master’s Degree in Education from Salem State College. Bob was a Korean War veteran who enlisted in the U.S. Army in July of 1952. After graduating from the officer training program at Fort Benning Infantry he went on to the Armor School at Fort Knox, KY. He returned to Danvers in 1955 and as a 1st Lt., joined the U.S. Army Reserve program. HE spent 25 years in the Army reserves and retired in 1980 as a colonel. He was the Commandant of the 1037th USAR School at the Boston army base from 1976-1980. He was also a graduate of the U.S. Army Command and General Staff College at Ft. Leavenworth, KS. In civilian life, he was a teacher, guidance counselor, assistance principal, and housemaster at Danvers High School. He retired in 1988 after 33 years as an educator. He enjoyed working in education and always spoke highly of the faculty with whom he worked. He felt all of the Danvers kids were great and a pleasure to associate with both in and out of school. In retirement, he pursued his hobby of collecting and dealing in antique bottles. He was the first president and treasurer of the Violin Bottle Collectors Association of America. He owned the original molds of the violin and banjo bottles and had bottles made at Pairpoint Crystal Glass Co. on Cape Cod. He sold his bottles via newsletters throughout the US and Canada. He was very proud of his family. In addition to his wife, he is survived by two sons, Robert Jr. and his wife Brenda of Danvers and Bradley and his wife Lisa of Kensington, NH, two daughters, Lauren Irving of Danvers and Tracey O’Leary of Salem. He is also survived by ten grandchildren, all of whom he loved and enjoyed: Ben, Alison, and Matt Irving, Meredyth and Robert Parsons, John, Derek, and Brady O’Leary, and Camden and Brook Parsons. His Funeral Service will be held on Thursday, September 10, 2015 at 10AM in the All Saints Episcopal Church, Holten & Cherry Sts., Danvers. Relatives and friends are invited. Burial will be private. Visiting Hours are Wednesday from 4-8PM in C.R. Lyons & Sons Funeral Directors, 28 Elm St., Danvers Square. In lieu of flowers, donations may be made to the Robert Parsons Memorial Scholarship, c/o Bank of America, 81 Elm St., Danvers, MA 01923.

Robert H. Parsons, 85, died Friday evening, September 4, 2015 at his home surrounded by his loving family. Affectionately known as Bob, he was the husband of E. Marilyn (Watkins) Parsons, with whom he shared 56 years of marriage. Bob was born... View Obituary & Service Information

The family of Robert H. Parsons Sr. created this Life Tributes page to make it easy to share your memories.