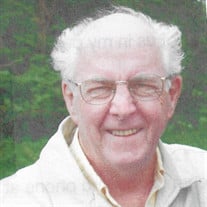 TOPSFIELD- Robert Benjamin Page died on June 27, 2021 on the Lord’s Day. Born in Beverly, he was a long time resident of Topsfield. He was the husband of the late Nina “Polly” Page with whom he shared 63 years of marriage. He was the son of the late Benjamin H. and Marjorie (Goodwin) Page. Robert served our country with the United States Navy from 1950-1954 and was honorably discharged. He had a long career in the printing trade, having retired from Gordon College Print Shop in 1995. Robert was also active in Boy Scouts of America for over 30 years and received the Eagle Scout badge. Robert leaves two sons, Robert W. Page of Conway, NH and Steven R. Page and his wife, Peggy of Greenland, NH and a daughter, Karen J. Zwicker and her husband, Donald of Danvers, three grandchildren, Brian and Christopher Page of Rochester, NH and Amanda Zwicker of Danvers. He also leaves a twin brother, Russell Page of Wolfeboro, NH and many nieces and nephews. He was predeceased by his sisters, Barbara Bertoni and Marjorie “Betty” Lemieux. His Funeral Service will be held at 10AM on Tuesday, July 13, 2021 at C.R. Lyons & Sons, Funeral Directors, 28 Elm St., Danvers. Burial will follow in Oakdale Cemetery, Middleton. Visitation will be held from 5-7PM on Monday, July 12, 2021 in the funeral home.

The family of Robert Benjamin Page created this Life Tributes page to make it easy to share your memories.