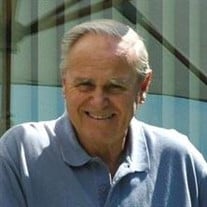 Robert H. LeClair, 85, of Danvers, died early Tuesday morning, June 12, 2018 at the Kaplan Family Hospice House following a lengthy illness. He was the loving husband of Ann (Gauthier) LeClair. Born in Salem on Nov. 26, 1932, he was the son of the late Wilfred and Mary (Bouchard) LeClair. He was raised and educated in Salem and was a graduate of St. Joseph Academy. As a young man he was a devoted altar server at Ste. Anne Church in Salem, was a Boy Scout, and loved playing the piano. He served honorably in the U.S. Air Force during the Korean War and later graduated from East Coast Aero Technical School. For many years, he owned and operated the North Beverly Sunoco Station. In retirement, he operated a painting and wallpapering business. A Danvers resident for fifty years and a parishioner of Saint Richard Church, Bob enjoyed golf, tennis, skiing, and boating. He was a member of the Danvers Touchdown Club, the Catholic Mr. & Mrs. Club, and the Polish Club. He and his wife enjoyed spending time at their homes in Naples, Maine and Sarasota, FL. In addition to his wife, he leaves three children, Cynthia Suarez and her husband Carlos of Marshfield, Ronald LeClair and his wife Nina of South Yarmouth, and Suzanne Morrison and her husband Dwight of Danvers, his grandchildren, Carolyn Schneider and her husband Judd, Elizabeth and Jacqueline Suarez, Christopher Morrison and his wife Katie, Connor and Cameron Morrison, and Olivia LeClair, his great-granddaughter, Emma, and several nieces and nephews. He was predeceased by his beloved grandson, David LeClair. His Funeral Mass will be celebrated on Friday, June 15, 2018 at 11AM in Saint Richard Church, 90 Forest St., Danvers. Relatives and friends are invited. Burial will be private and there are no visiting hours. In lieu of flowers, donations in Bob’s name may be made to the Alzheimer’s Association, 09 Waverley Oaks Rd., Waltham MA 02452.

Robert H. LeClair, 85, of Danvers, died early Tuesday morning, June 12, 2018 at the Kaplan Family Hospice House following a lengthy illness. He was the loving husband of Ann (Gauthier) LeClair. Born in Salem on Nov. 26, 1932, he was the son... View Obituary & Service Information

The family of Robert H. LeClair created this Life Tributes page to make it easy to share your memories.