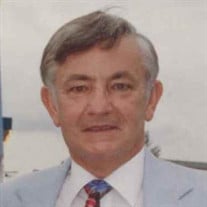 PEABODY- Robert F. Hebert, 86, passed away with his family by his side on January 10, 2019 in Beverly Hospital. He was the loving husband of Jean (L’Abbe) Hebert with whom they shared 65 years of marriage. Born in Worcester on September 24, 1932, he was the son of the late Edward and Alice (Paul) Hebert. Robert was raised and educated in Worcester. He served his country with, the United States National Guard and then with the United States Air Force during both the Korean and Vietnam Wars. After retiring from the service he had a career as a Chef and Culinary Director within the food service industry. Robert then had a career as a director in food service for many years. He was a member of the Knights of Columbus, Leo Council 508 in Peabody. Robert and Jean wintered in St. Petersburg, FL for many years. He was an avid bowler, playing in many local leagues and a Boston sports fan. Some of his favorite things he enjoyed doing were playing bingo and trips to Foxwoods. In addition to his wife, Jean, he is survived by four children, Paul Hebert and his wife, Heidi of Peabody, Dan Hebert of Peabody, Tim Hebert and his wife, Colleen of MO and Kevin Hebert and his wife, Rita of Salem, his sister, Rose Paradis of Worcester, twelve grandchildren, ten great grandchildren and a great-great grandson. He was predeceased by his daughter-in-law, Lois Hebert, and his siblings, Henry, Edward, Francis, Celina Martel and Rita Kelleher. His graveside service will be held at 11AM on Monday, April 22, 2019 in Puritan Lawn Memorial Park, Lake St., Peabody. Relatives and friends a re invited. In lieu of flowers donations may be made in his name to Care Dimensions, 75 Sylvan St., Danvers. MA. 01923.

PEABODY- Robert F. Hebert, 86, passed away with his family by his side on January 10, 2019 in Beverly Hospital. He was the loving husband of Jean (L&#8217;Abbe) Hebert with whom they shared 65 years of marriage. Born in Worcester on September... View Obituary & Service Information

The family of Robert F. Hebert created this Life Tributes page to make it easy to share your memories.

PEABODY- Robert F. Hebert, 86, passed away with his family by...