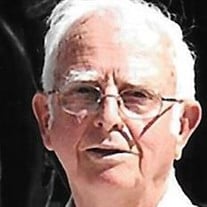 Robert V. Hayes, 92, died Wednesday evening, June 7, 2017 at home, surrounded by his loving family. He was the loving husband of Ruth (White) Hayes, with whom he shared nearly sixty-seven years of marriage. Born in Salem on Nov. 4, 1924, he was the son of the late Ernest and Alice (Jennings) Hayes. He was raised and educated in Lynn and was a graduate of Lynn English High School. He went on to study at the College of the Holy Cross, where his studies were interrupted by WWII. He served honorably in the U.S. Navy until the completion of the war, and returned to Holy Cross, where he earned his bachelor’s degree. Mr. Hayes taught social studies at Saugus High School for more than twenty years. While teaching, he and his wife founded County Insurance, which together they owned and operated until their retirement. A communicant of Saint Mary of the Annunciation Church, he had been a member of the Mr. & Mrs. Club and the Holy Name Society. He was a member of the Danvers Historical Society, was an avid Red Sox fan, and had a keen interest in both national and local politics. He enjoyed wintering in Naples, FL with his wife for many years. In addition to his wife, he leaves his children, Kathleen Moore and her husband Richard of New Jersey, Jeanne Kornachuk and her husband Walter of Danvers, Robert Hayes and his wife Claudia of Danvers, Diane Hayes of Colorado, and William Hayes and his wife Pina of Merrimac, his grandchildren, Kristin Compton, Jonathan Moore, Shanna and Haley Kornachuk, Amanda Faria, and Stephen, Michael, and Nicholas Hayes, and two great-grandchildren, Hayden Moore and Jolene Faria. The Hayes family is grateful to Freedom Healthcare for the care he received, especially from Joyce, Erma, and Cerese. His Funeral Mass will be Monday, June 12, 2017 at 11AM in Saint Mary of the Annunciation Church, 24 Conant St., Danvers. Burial will follow in Annunciation Cemetery, Danvers. Relatives and friends are invited. Visiting hours will be prior to the Mass from 9-10:45AM in C.R. Lyons & Sons Funeral Directors, 28 Elm St., Danvers Square. In lieu of flowers, donations in Mr. Hayes’ name may be made to the Wounded Warrior Project, PO Box 758517, Topeka, KS 66675.

Robert V. Hayes, 92, died Wednesday evening, June 7, 2017 at home, surrounded by his loving family. He was the loving husband of Ruth (White) Hayes, with whom he shared nearly sixty-seven years of marriage. Born in Salem on Nov. 4, 1924, he... View Obituary & Service Information

The family of Robert V. Hayes created this Life Tributes page to make it easy to share your memories.