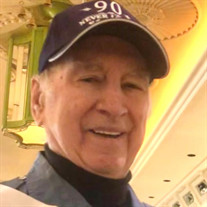 DANVERS- Robert A. “Bob” Garron, 90, passed away on April 26, 2022, surrounded by his family in Kaplan Family Hospice House. He was the beloved husband of the late Lena (DelVecchio) Garron for over 51 years. Born in Malden on March 12, 1932, he was the son of the late Thomas and Irene (Broussard) Garron. He was raised and educated in Malden. Robert served his country with the United States Army during the Korean War in the 5th Regimental Combat Unit and was honorably discharged. Bob spent most of his life in Everett where he raised his family, before moving to Danvers in 2005. He was a talented carpenter and was employed by the MBTA for many years until retiring in 1991. Bob was an avid golfer and bowler. He had been a member of the Arlington Retired Men’s Club and golfed at Lynnfield Center. Bob was a jokester and liked to make people laugh. Above all, he would do anything for the ones he loved and was always there for his family. He is survived by three children, Michael Garron and his wife Sabrina of Stratham, NH, Gail Sowerder Garron and her husband, Phil Sowerder of Danvers, Michele Garron-Wenchell and her husband, Tom Wenchell of Durham, CT, his former daughter-in-law, Sandy Garron of Newburyport, his siblings, Richard Garron of NH and Irene Raymond of ME, six grandchildren, Thomas and Robert Garron, Connor and Evan Wenchell and Julianna and Natalie Bernard. Bob also leaves behind many godchildren, nieces and nephews. He was predeceased by his brothers, William, Donald, Paul, James and John. His Funeral service will be held at 12:30PM on Saturday, April 30, 2022, at C.R. Lyons & Sons, Funeral Directors 28 Elm St., Danvers. Burial will follow in Annunciation Cemetery, Danvers. Visitation will be held in the funeral home from 10:30AM-12:30PM prior to the service on Saturday. In lieu of flowers donations may be made in Robert’s name to Care Dimensions, 75 Sylvan St., Danvers, MA, 01923.

DANVERS- Robert A. &#8220;Bob&#8221; Garron, 90, passed away on April 26, 2022, surrounded by his family in Kaplan Family Hospice House. He was the beloved husband of the late Lena (DelVecchio) Garron for over 51 years. Born in Malden on March... View Obituary & Service Information

The family of Robert A. Garron created this Life Tributes page to make it easy to share your memories.