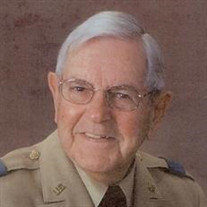 DANVERS- Robert K. Flachbart, 95, peacefully passed away, in his home on April 2, 2015. He was the loving husband of Judy (Hawkes) Flachbart with whom he shared 29 years of marriage. Bob was born in Peabody on March 14, 1920. He was the son of the late Arthur and Catherine (Cronin) Flachbart. Bob started his first business, a Sunoco service station on Cabot Street in Beverly at the young age of 21. He sold that business to enlist in the United States Army during World War II, less than three weeks after the Japanese attacked Pearl Harbor. Bob returned from World War II as a highly decorated Veteran and hero, earning a Silver Star for Gallantry in Action. On February 7, 1944, near Carroceto, Italy, during an enemy counterattack against the company position, all other members of Corporal Flachbart's machine gun squad were wounded or killed. Bob manned the gun unassisted and delivered effective fire on the attacking forces. When he had expanded all available ammunition, he fought the attacking forces with hand grenades until the attack was repulsed and his position was again secure. Along with the prestigious Silver Star, Bob earned two Bronze Stars for Meritorious Achievement in ground operations against the enemy and two Purple Hearts for wounds received in action. Bob returned from WWII on a hospital ship and finished his Army days working at the Pentagon in Washington, D.C. as a courier for General George C. Marshall. After the war, Bob owned two more service stations in Peabody and Salem, along with a career with Sunoco Oil Company, driving a semi-tanker, a job that he greatly enjoyed When Bob turned 50, he went full time with his hobby of refinishing and restoring antique furniture and, in doing so, turned a hobby that he loved into a thriving business. Bob refinished and restored antique furniture for several noteworthy museums in the Boston area, including the Museum of Fine Arts in Boston and countless clients throughout the North Shore for over 40 years. Besides his wife Judy, he is survived by his four children, Carole White and her husband David of Amelia Island, Florida, Robert T. Flachbart formerly of Danvers, now residing in Gloucester, Eric J. Flachbart and his wife Sepi of Newport, Vermont and Kurt Flachbart and his wife Laura of Naples, Maine. Bob had five grandchildren: Carl, Todd, Ryan, Allyson and Lili and two great granddaughters, Johanna and Erin, as well as a very special niece, Mary-Ann Flachbart of Marblehead. Bob was predeceased by his late wife Mary Alice (Deschenes) Flachbart, who passed from cancer in 1984 after sharing 39 years of marriage; his brother, Arthur K. Flachbart, nephew Michael K. Flachbart and niece Paula L. Flachbart. His Funeral Service will be celebrated at 11AM on Tuesday, April 21, 2015 in Holy Trinity United Methodist Church, 16 Sylvan St., Danvers. Visitation will be held from 4-8PM on Monday, April 20, 2015 at C.R. Lyons & Sons, Funeral Directors, 28 Elm St., Danvers. In lieu of flowers, memorial donations may be made in Bob’s name to the Holy Trinity Church, 16 Sylvan St., Danvers, MA, 01923 or the Merrimack Valley Feline Hospital, 63 Elm St., Salisbury, MA 01952.

DANVERS- Robert K. Flachbart, 95, peacefully passed away, in his home on April 2, 2015. He was the loving husband of Judy (Hawkes) Flachbart with whom he shared 29 years of marriage. Bob was born in Peabody on March 14, 1920. He was the son... View Obituary & Service Information

The family of Robert K. Flachbart created this Life Tributes page to make it easy to share your memories.