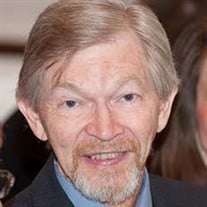 NORTH ANDOVER - Robert E. Davis, 71, passed away on June 6, 2016 at his home. He was the husband of Pamela J. (Mercier) Davis with whom he shared 45 years of marriage. Born in Revere in May 17, 1945, he was the son of the late Elwin and Irma M. (Bowen) Davis. He was raised and educated in Danvers and graduated from Holten High School in 1963. He also attended Boston University. Bob proudly served his country with the United States Army during the Vietnam War. He was honorably discharged and earned an expert marksmanship medal. He had worked as an electrical engineer for Lucent Technologies and retired from AT &T. Bob had lived in Danvers prior to spending the past 26 years in North Andover. He enjoyed flying and had a commercial pilot’s license and instructor rating. Bob also was a partner in Audiophonics, where he designed and built high-end speakers. Besides his wife, Pamela, he is survived by his daughter, Cheryl Davis of N. Andover, his siblings, Wayne Davis of Marblehead, Tracey Price of Haverhill, Jean Donahue of Groveland, James Burns of CA, Edward Burns of Winchendon and Lisa St. Claire of Danvers, several nieces and nephews and a dear friend, Thomas King of NH. He was predeceased by his son, John Davis. Bob’s service will be held privately. Expressions of sympathy may be made in Bob’s name to The Humane Society of the United States, Dept: Gift Donations, 2100 L Street, NW, Washington, DC 20037.

The family of Robert E. Davis created this Life Tributes page to make it easy to share your memories.