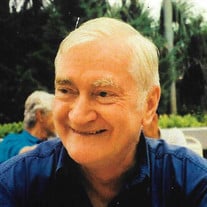 DANVERS- Robert F. Connolly, 87, passed away on June 23, 2019 in the Kaplan Family Hospice House. He was the husband of Christine (Joly) Connolly with whom he shared 63 years of marriage. Born in New York, NY on July 4, 1931, he was the son of the late James and Anna (Flannagan) Connolly. He served our country with the United States Navy on the U.S.S. Leyte CV-32 during the Korean War and was honorably discharged. Robert was the owner of Chris’ Convenience Store and Chris’ Gas in Danvers for many years. He also was employed by Salem Five for fifteen years prior to retirement. Robert was a member of the Polish Club in Danvers and an Alumni of Madison Square Boys Club in New York. In addition to his wife, Christine, he is survived by four children, Timothy Connolly and his wife Diane of Escondido, CA; Deborah Wilson and her husband Peter of Danvers; Maureen Miller of Danvers; Michael Connolly and his wife Carolyn of Peabody, and son-in-law Bernard Miller of Bradford, eight grandchildren, Leigha Connolly, Haley and Jacob Miller, Alexander, Maura and Craig Wilson, Douglas and Jillian Connolly, two siblings, Jack and Virginia Connolly of NY and several nieces and nephews. He was predeceased by four siblings, Jane, Donald, James and Bernadette Connolly. Robert loved spending time with his family and friends at gatherings, always entertaining everyone with his humor, sing-alongs, and rehashing stories of times gone by. He and Christine enjoyed walks along the beach and sitting by the ocean watching boats pass by in the harbor. He had a gift for gab, and whenever he was out he would wish everyone a good day and present them with a gift of candy. His Funeral Mass will be celebrated at 9AM on Friday, June 28, 2019 in Saint Richard Church, 90 Forest St., Danvers. Burial will follow in St. Mary Cemetery, Salem. Visitation will be held from 4-7PM on Thursday, June 27, 2019 at C.R. Lyons & Sons, Funeral Directors, 28 Elm St., Danvers. In lieu of flowers donations may be made in Robert’s name to Madison Square Boys & Girls Club, 733 Third Ave, Floor 2, New York, NY 10017 or The P.R.L.A.C.C. c/o Scholarship Funds, 12 Cheever St., Danvers, MA, 01923.

DANVERS- Robert F. Connolly, 87, passed away on June 23, 2019 in the Kaplan Family Hospice House. He was the husband of Christine (Joly) Connolly with whom he shared 63 years of marriage. Born in New York, NY on July 4, 1931, he was the son... View Obituary & Service Information

The family of Robert F. Connolly created this Life Tributes page to make it easy to share your memories.