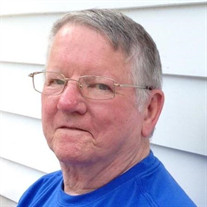 Robert J. Casey, 74, of Middleton, passed away peacefully on Friday, March 1, 2019 at the Kaplan Family Hospice House in Danvers surrounded by his loving family following a long illness. He was the beloved husband of Bernice M. (Monroe) Casey, with whom he shared fifty-two years of marriage. Born in Salem on July 28, 1944, he was the son of the late Joseph and Edith (Sawyer) Casey. Bob served honorably in the U.S. Army from 1961 through 1964 during which time he was stationed in Germany. He was proud of his service to the country. A hardworking and devoted employee, he worked at Richardson’s Dairy for forty-seven years until his retirement in 2013. When not working, Bob enjoyed gardening, which he was able to continue in retirement. He also enjoyed salt and fresh water fishing and followed his favorite sports teams. His favorite pastime, however, was spending time with his grandchildren. In addition to his wife, he leaves two loving daughters, Sandra Perkins and her husband James of Danvers and Patricia Szczechowicz and her husband Kevin of North Berwick, ME, five adored grandchildren, Abigail and Alexander Perkins and Nathan, Jack, and Lillian Szczechowicz. He also leaves a brother, Thomas Casey, with whom he had a special bond, and his wife Kathy of North Carolina and their children, Noreen, Carol, and Rob, his sister Susanne Berman and her husband Scott of North Carolina and their children Jonathan and Casey, and his brother-in-law, Frank Twiss and his wife Ilene of Middleton and their children, Dennis, Ryan, and William, with whom he was especially close, as well as many other nieces, nephews, and cousins. He was predeceased by a brother-in-law, James Monroe. His Funeral Service will be Saturday, March 9, 2019 at 11AM in C.R. Lyons & Sons Funeral Directors, 28 Elm St., Danvers Square. Burial with military honors will follow in Oakdale Cemetery, Middleton. Relatives and friends are invited. Visitation will be prior to the service from 9:00-10:45AM. In lieu of flowers, donations in Robert’s name may be made to the local hospice, Care Dimensions, 75 Sylvan St., Danvers, MA 01923.

Robert J. Casey, 74, of Middleton, passed away peacefully on Friday, March 1, 2019 at the Kaplan Family Hospice House in Danvers surrounded by his loving family following a long illness. He was the beloved husband of Bernice M. (Monroe) Casey,... View Obituary & Service Information

The family of Robert J. Casey created this Life Tributes page to make it easy to share your memories.

Robert J. Casey, 74, of Middleton, passed away peacefully on...