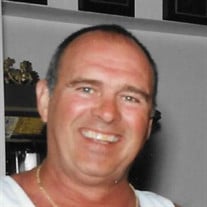 DANVERS- G. Richard Parker, 73, passed away on December 6, 2017 in Massachusetts General Hospital following a lengthy illness. He was predeceased by the love of his life Cynthia “Cindi” LaBrie with whom he shared over 23 years. Born in Salem on November 15, 1944, he was the son of the late Herbert and Edna (Druce) Parker. Richard had been employed with the New England Telephone Company as a lineman for over 25 years. He had been a longtime Danvers Polish Club member and enjoyed volunteering for many of their social events they held for the community. Richard also enjoyed camping in his RV, canoeing, snowmobiling and cooking even after he was unable to eat. Richard will always be remembered for his brave and courageous battle with cancer and a kidney transplant. He was given the gift of life by Adam Slaven, his organ donor. Throughout all his medical conditions Richard remained self-sufficient and kept his sense of humor. The special bond between Richard and Chantel was of two people who cared for each other, loved each other and needed each other. He is survived by his daughter, Chantel LaBrie and her companion Glen Parker of Danvers, his sister-in-law, Miriam Parker Nee of Danvers, his nieces and nephews, Wayne and Darryl Parker, Marlene Oster, Jeannine and Gail Parker, Donald, Darrele, Doreen and Dwight Haskell and Donna and Rick DuHaime, his lifelong friend Rolli Knight, his dogs C.C. and Nikko and many extended friends and family. He was predeceased by his siblings, H. Glenfield Parker, Grace ‘Rusty” Soucy, Doris Haskell and his nephew and best friend, Glenny Parker. His Funeral Service will be held at 10AM on Monday, December 11, 2017 at C.R. Lyons & Sons, Funeral Directors, 28 Elm St., Danvers. Burial will follow in Walnut Grove Cemetery, Danvers. Visitation will be held on Sunday, December 10, 2017 from 4-7PM in the funeral home. In lieu of flowers, donations may be made in Richard Parker/ Adam Slaven’s names to New England Donor Services 60 First Ave, Waltham, MA, 02451 or at www.neds.org

DANVERS- G. Richard Parker, 73, passed away on December 6, 2017 in Massachusetts General Hospital following a lengthy illness. He was predeceased by the love of his life Cynthia &#8220;Cindi&#8221; LaBrie with whom he shared over 23 years. Born... View Obituary & Service Information

The family of Richard Parker created this Life Tributes page to make it easy to share your memories.